There are hundreds of top vegan YouTubers out there sharing their thoughts and advice on everything from plant-based recipes and grocery hauls to fitness, animal rights activism and vegan lifestyle hacks. Here are 13 of the best vegan YouTube channels, plus some bonus picks to keep you inspired. 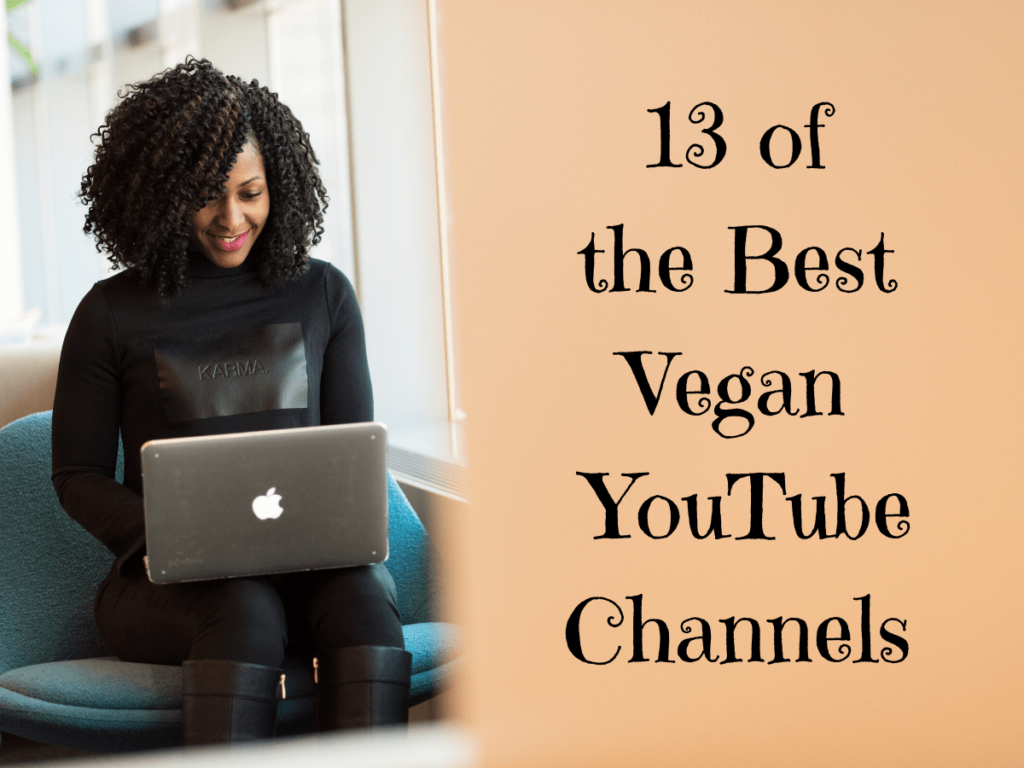 Launched: April 2015
Covers: vegan news
Hosts: Klaus Mitchell is the founder of Plant Based News, a website, podcast, YouTube channel and weekly newsletter sharing the latest vegan news from around the world. Robbie Lockie, the managing director and co-founder, also appears in videos and runs the podcast.
Watch Plant Based News

Plant Based News is now one of the leading vegan news outlets in the world, delivering stories every day on their website and regular videos covering vegan nutrition, ethical consumerism, sustainability, health, the environment and vegan news. The channel also features a yearly documentary tracking the key developments in the vegan movement and hosts other documentaries like HOPE and PlantPure Nation. I particularly like the interviews with guests like Dr Michael Greger and Dr Neal Barnard. Other video categories include food hauls and taste tests, response videos, celebrity news and vegan bodybuilding and fitness.

Gaz publishes high-quality recipe videos filmed with a proper crew in a studio setting and edited to perfection. Not only that, as a former fine-dining chef, he has the skills and experience to create some incredible dishes, making this one of the best vegan cooking Youtube channels out there. Video playlists include high-protein meals, gluten-free recipes, 15-minute meals, Christmas dishes and meal prep as well as a few vlogs about vegan fitness, fashion and travel. Popular videos include his vegan fish and chips, budget vegan meal prep, salted caramel chocolate bars and a Kentucky fried chicken burger.

Launched: December 2015
Covers: food and lifestyle
Host: Caitlin, who lives near Portland in the US and is a long-term vegan and certified yoga teacher. After going vegan at college, where she wasn’t able to find simple, budget-friendly vegan food, Caitlin launched a blog, From my Bowl, and her Youtube channel to address this issue.
Watch Caitlin Shoemaker

Caitlin’s channel covers wholesome, simple, cheap vegan recipes that are usually free from oil, gluten and refined sugar. Her passion for a healthy, plant-based lifestyle shines through in her videos, which also touch on yoga, mental health, skincare and her personal life. The core of the channel though is food and you’ll find some useful meal inspiration here, as well as American grocery hauls, what I eat in a day vlogs and vegan meal prep.

Some find Joey’s style of activism confrontational but I like the fact that he unapologetically stands up for animals. His often-blunt style of street activism, working with Anonymous for the Voiceless around the UK and Europe, is very effective and his videos have a huge reach. Joey also publishes videos addressing vegan topics and news stories as well as themed series’ like Joey vs Piers Morgan, Februscary, and Joey vs the public. If you’re interested in activism, watch his Dominion tour, Light up the World and Vegan Prophecy videos where he takes his message around the world.

Jenne is one of the most visible black vegan YouTubers and an essential watch in a sea of white, male vegan channels. A mum from the US, Jenne shares her vegan lifestyle and cooking advice, with hearty and nutritious vegan recipes and comfort dishes, protein-packed meals and of course, all things sweet potato. Jenne’s playlists includes vegan pregnancy and baby videis, vegan dessert recipes, vegan beauty and fashion. Sweet Potato Soul’s Vegan 101 series is perfect for helping new vegans, with kitchen tours and cheap vegan meal prep ideas.

Launched: December 2015
Covers: activism and debate
Host: Ed Winters, a UK vegan activist, content creator and public speaker. The co-founder of Surge and Unity Diner, Ed is based in London but travels the country spreading his peaceful vegan message and has spoken at TEDx, over a third of UK universities, six Ivy League colleges and as a guest lecturer at Cambridge and Harvard.
Watch Earthling Ed

If you’re looking for vegan street activism, Ed is one of the best vegan YouTubers out there. Known for his calm, respectful debating style based on the Socratic method, Ed has dozens of videos showing his debates with the public, as well as speeches from his university tours. New and old vegans alike should watch his 30 Days, 30 Excuses series  based on his free e-book: 30 non-vegan excuses and how to respond to them. These are really useful to help you debunk the most common excuses people use to not go vegan, from ‘our ancestors ate animals’ to ‘plants feel pain.’ Don’t miss his interviews with vegan experts and the stirring Land of Hope and Glory documentary, which exposes the hidden truth behind UK animal farming.

Considered one of the best vegan channels on YouTube by many, Hot for Food has tons of recipe inspiration to keep you busy in the kitchen. Popular videos include cauliflower wings three ways, vegan nacho cheese and vegan chicken noodle soup. Lauren also has a series: Hot for Food Takeover, where she visits viewers home to help them cook in their own kitchens. What’s great about this channel is that it features comfort food as well as healthy recipes and topics like cruelty-free beauty.

Launched: May 2013
Covers: vegan health and fitness
Host: Jon Venus is a vegan fitness fanatic from the US. As well as his YouTube channel, Jon has a website, eBooks and a private Facebook group with his partner Kathrine Moen, a nutritionist and personal trainer, to help people get fit and healthy through adopting a vegan lifestyle.
Watch Jon Venus

Jon is one of the top vegan fitness YouTubers out there and has a huge following. Join him for vegan recipes for fitness, including high-protein and meal prep, as well as fitness challenges and workouts. Playlists include bulking videos, home workouts and the fat loss series with popular videos like best meal prep for fitness and real body fat percentage examples.

Launched: May 2016
Covers: lifestyle and food
Host: Rae, a London vlogger and blogger who is relatively new to the scene. With a practical, down-to-earth style, Rae aims to make the vegan journey easier for people, with plenty of humour along the way.
Watch Rae Likes Fruit

I find Rae’s channel great for UK vegan grocery hauls and budget buys, she has at least one video for each of the major supermarket chains and includes in-depth info on pricing. Rae also films honest reviews of many of the products she samples and isn’t shy about saying which ones suck. With her signature quirky style, Rae also has a range of vlogs about everyday vegan life, what I ate videos, fashion and chats. Check out her new Weird Vegan Recipes series, which includes making salmon from carrots and watermelon steak.

Launched: March 2015
Covers: simple vegan food on a budget
Host: Rose Lee was born in South Korea and raised in Canada, where she now has a wildly popular blog and YouTube channel that shows veganism doesn’t need to be difficult or expensive. Rose has also published the Everyday Asian Vegan recipe e-book.
Watch Cheap Lazy Vegan

Tune into Cheap Lazy Vegan to discover how to make delicious meals with minimal ingredients, money, skill and time. This channel is great for students and anyone on a budget, full of cooking hacks, cheap recipes, grocery hauls and efficient meal prepping guides. Popular videos include air fryer recipes, three easy Korean sauce recipes and vegan meal prep for $20 a week. Rose has some entertaining what I eat in a day and vlog-style videos, as well as beauty and travel editions.

Launched: July 2015
Covers: vegan nutrition and health
Host: Mike, a US-based science writer and cookbook author who is a studying public health Masters. As a science writer, Mike has in-depth knowledge of the health effects of a vegan diet and the environmental impact of being vegan.
Watch Mic the Vegan

The beauty of Mic the Vegan is that his videos break down complicated topics in a simple, humorous style. Mike tackles vegan diet myths and ethical issues, with playlists like clogged artery madness and disease investigator binge. Popular videos include interviews with nutrition experts and topics like how your body transforms on a vegan diet and how to prevent deficiencies on a vegan diet.

Launched: April 2014
Covers: vegan fitness
Host: Scottish vegan Stefanie Moir is a psychology graduate and vegan health and fitness expert. She also has her own book, Naturally Stefanie, which features recipes, workouts and daily rituals for a stronger, happier you.
Watch Naturally Stefanie

A top female vegan fitness icon, Stefanie has a channel bursting with inspiring content. Watch her workouts and fitness tips, which include honest physique updates, and find out what she eats in recipe videos, day in the life and personal updates. Popular uploads include high-protein meals, how I build muscle and lose fat and healthy food swaps.

Launched: April 2013
Covers: vegan food and lifestyle
Hosts: Californian couple Anji Bee and Ryan Lum, who also have their own band Lovespirals. The pair focus on a high-carb vegan diet and have created thousands of videos, as well as a recipe e-book: Keep it Carbed, Baby! The Official Happy Healthy Vegan Cookbook.
Watch Happy Healthy Vegan

This long-running channel promotes vegan health, fitness and protecting animals and the environment through a vegan lifestyle. Expect regular, intimate videos about their vegan lifestyle. Topics cover everything from vegan news stories to recipes, eating challenges, travel and what I eat in a day. Ryan puts out some excellent commentary-style videos tackling anti-vegan media while Anji focuses on more lifestyle content such as reviews, vlogs and unboxings. 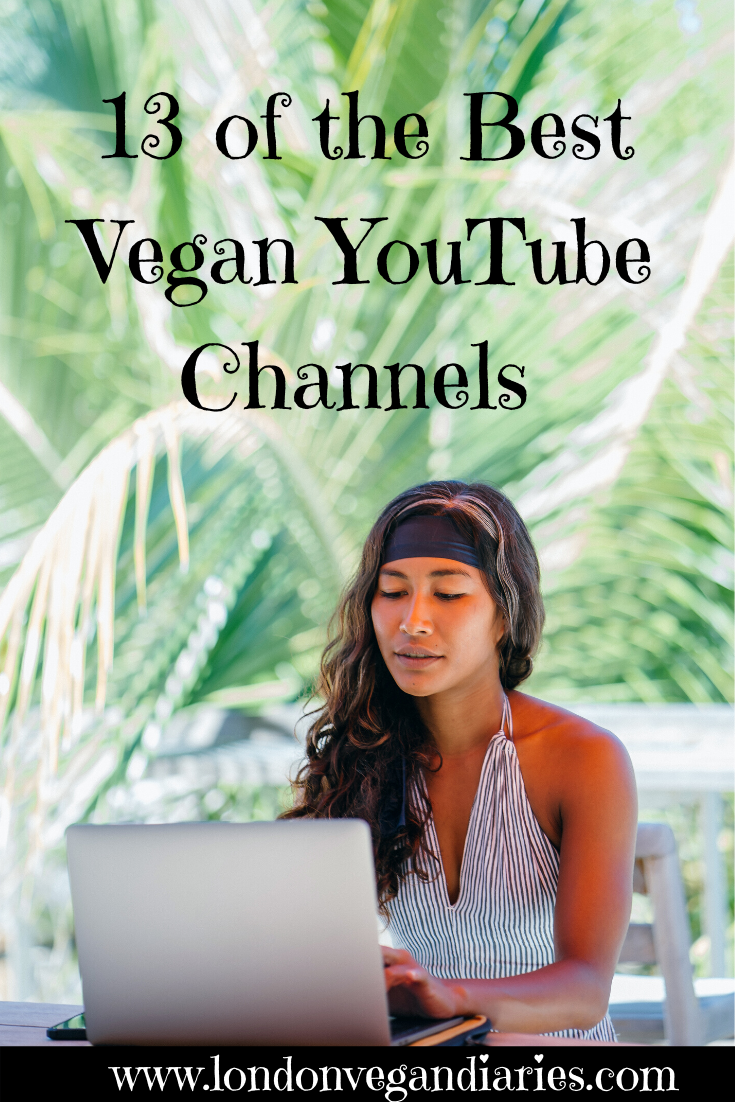 7shares
← Vegfest London Vegan Films that will Change your Life →