If you’re a vegan looking for a casual, quick bite to eat in London, you can’t go wrong with By Chloe. The New York City restaurant chain now has four branches in London and offers a range of tasty eat-in or takeaway options, from quinoa tacos to plant-based burgers, vegan mac and cheese, sandwiches and an array of freshly-baked cakes.

Founded by American vegan chef Chloe Coscarelli, the first By Chloe restaurant was launched in New York City’s West Village in 2015. The theme was fast-casual dining with a limited By Chloe menu of vegan dishes served in light, bright spaces including healthy options as well as indulgent burgers, cookies, cakes and ice cream.

Since then, the restaurant has morphed into a chain, with 15 eateries in North America based in New York City, Boston, Los Angeles, Toronto and Rhode Island. In 2018, the first Eat by Chloe London restaurant was opened in Covent Garden and subsequent branches have launched in Tower Bridge, Oxford Circus and the O2. The restaurant has a pay-at-the-counter model and tables for eating in, as well as a fridge with quick grab-and-go options.

How to visit By Chloe London

During the Covid-19 crisis, By Chloe London restaurants are open for pick-up only but food can be ordered on Deliveroo. You can check out restaurant re-opening details and the latest menu offerings on their website on social media channels:

Here are the address and regular opening hours (before Covid-19) for all four branches of By Chloe in London:

The O2 by Chloe

Crispy-on-the-outside-and-soft-and-gooey-on-the-inside. Our DOUBLE CHOCOLATE CHIP COOKIE 🍪🍫. Get 6 for $10 (’cause trust us, you can’t eat just one).

What’s on the By Chloe menu?

You can view the full By Chloe London menu here and read reviews of the popular Covent Garden branch on Tripadvisor and Happy Cow. Highlights of the menu include the tofish, mac and cheese and signature guac burger: a black bean, quinoa and sweet potato patty topped with guacamole that has been named the best veggie burger in New York City by multiple publications including Time Out. By Chloe’s best-selling options according to Deliveroo are:

You’ll also find a variety of sandwiches on offer, including the pesto meatball and pre-packed options like vegan tuna and sweetcorn. Fries and dips are available as sides and for dessert there’s a variety of cupcakes, muffins and cookies. Wondering about By Chloe London prices? They average around £9 for a main, £3.50 for fries and between £2.40 and £3.90 for cakes, here are some sample prices:

What I love about the By Chloe restaurant London

If you’re busy out and about in London or are on a lunch break, By Chloe is a fast and convenient place to grab some tasty vegan food. I’ve visited the Covent Garden By Chloe restaurant several times and it’s bright and inviting, with plenty of room to sit and eat and a large fridge filled with items you can pick-up and run with. 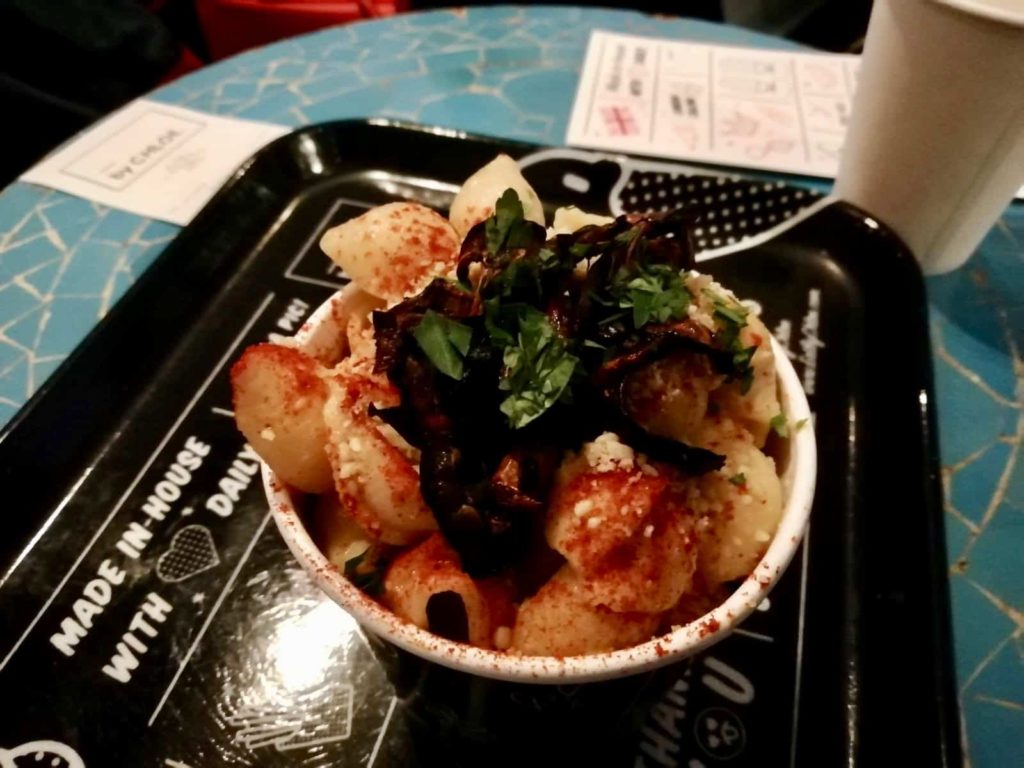 The food is no-nonsense and tasty, I loved the tofish which had a really crispy batter and the mac n cheese was decent but could have been saucier. Fries were the perfect accompaniment and there’s a dispenser with a range of sauces, from ketchup to mayo and aioli. The free water dispenser is also really convenient and cakes are freshly baked.