Join thousands of vegans as they march through the streets of London to demand animal liberation at the Official Animal Rights March. Held every summer, the march is a great way to dip your toe into activism, raise awareness about animal rights and make your voice heard. 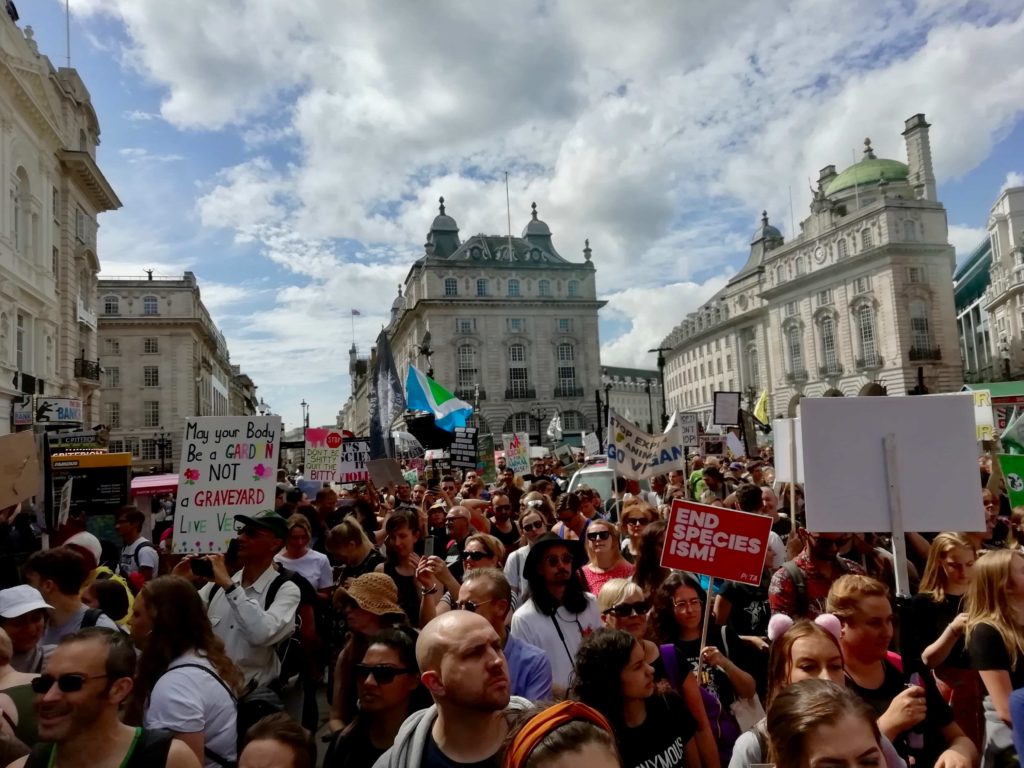 What is the Official Animal Rights March?

The Official Animal Rights March was founded in 2016 by the grassroots, non-profit organisation Surge. Their mission is to end all animal oppression and create a vegan world through campaigns, educational programmes and investigations. The march allows vegans to simultaneously gather in cities around the world and walk through the streets singing, chanting and waving banners to demand animal liberation. 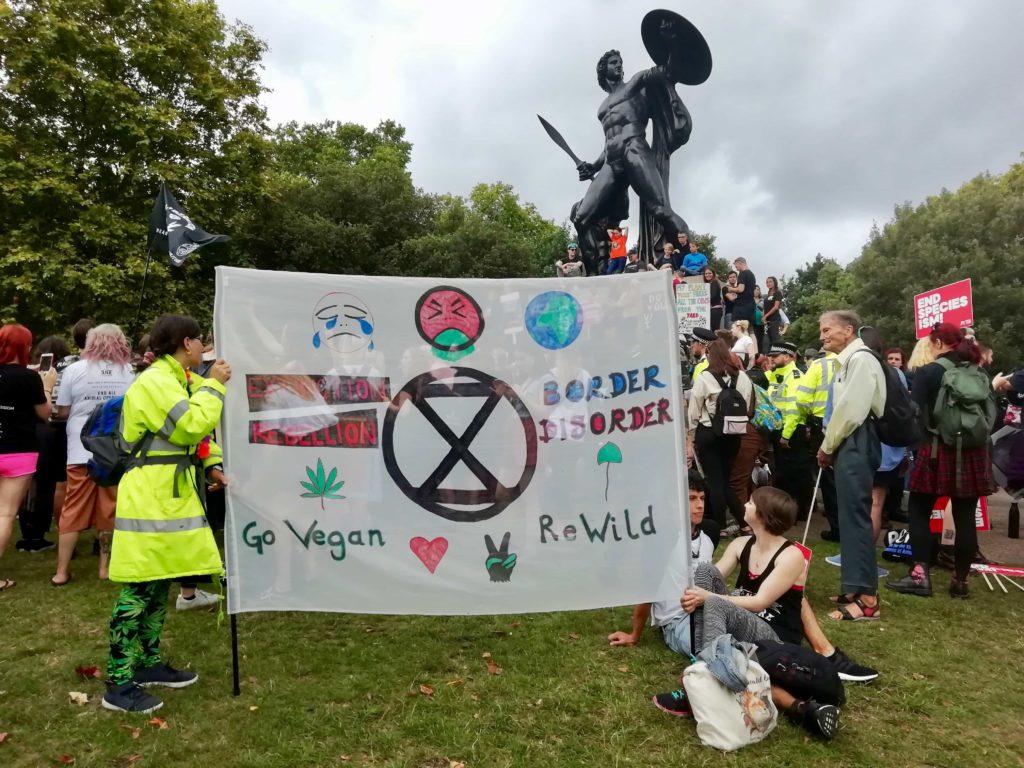 According to Surge, the purpose of the protest is: “To unite the vegan community globally and inspire vegans to speak up for animals in their everyday lives and get active in their local communities.” 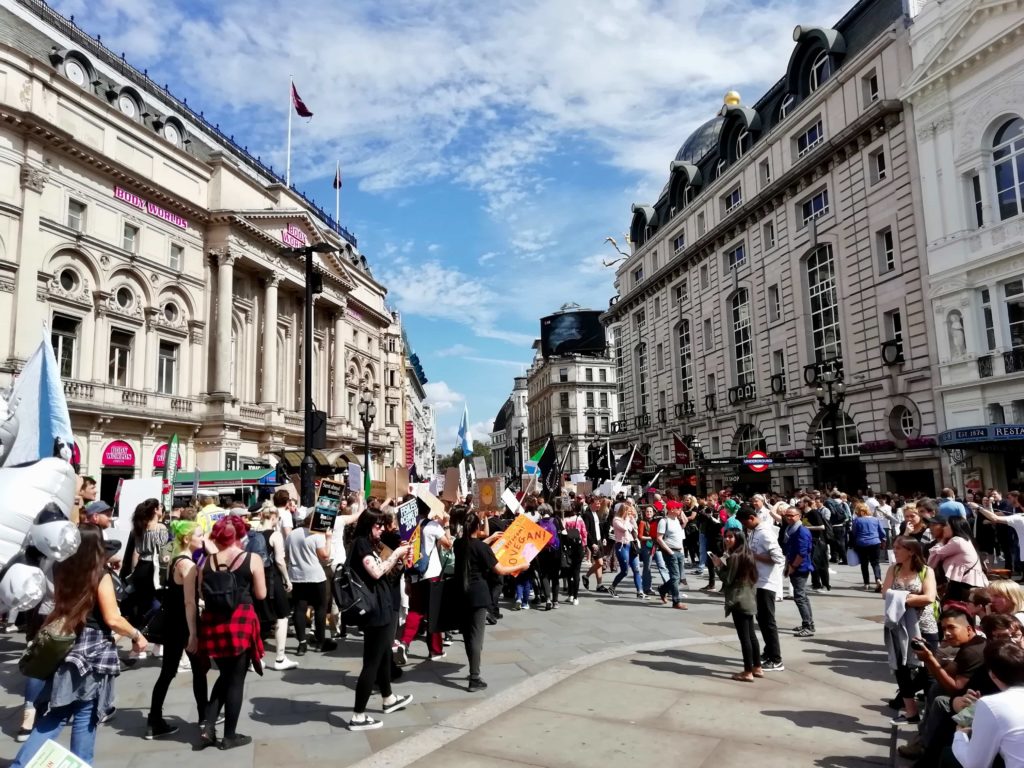 When it began in 2016, the march attracted 2,500 attendees and the numbers have increased dramatically in the years since. The Animal Rights March 2019 was held in 49 cities worldwide, from Berlin to Melbourne, and was attended by 41,000 activists. The London Animal Rights March in 2019 saw 12,000 people – a record-breaking number – take to the streets.

When and where does the march take place?

The Animal Rights March takes place every August, in 2019 it was held on the 17th at midday and lasted around four hours. Due to Covid-19, the 2020 march has been postponed but you can sign up to the newsletter to find out when the next one will be and check out the official website, Facebook page or Instagram for updates and information. 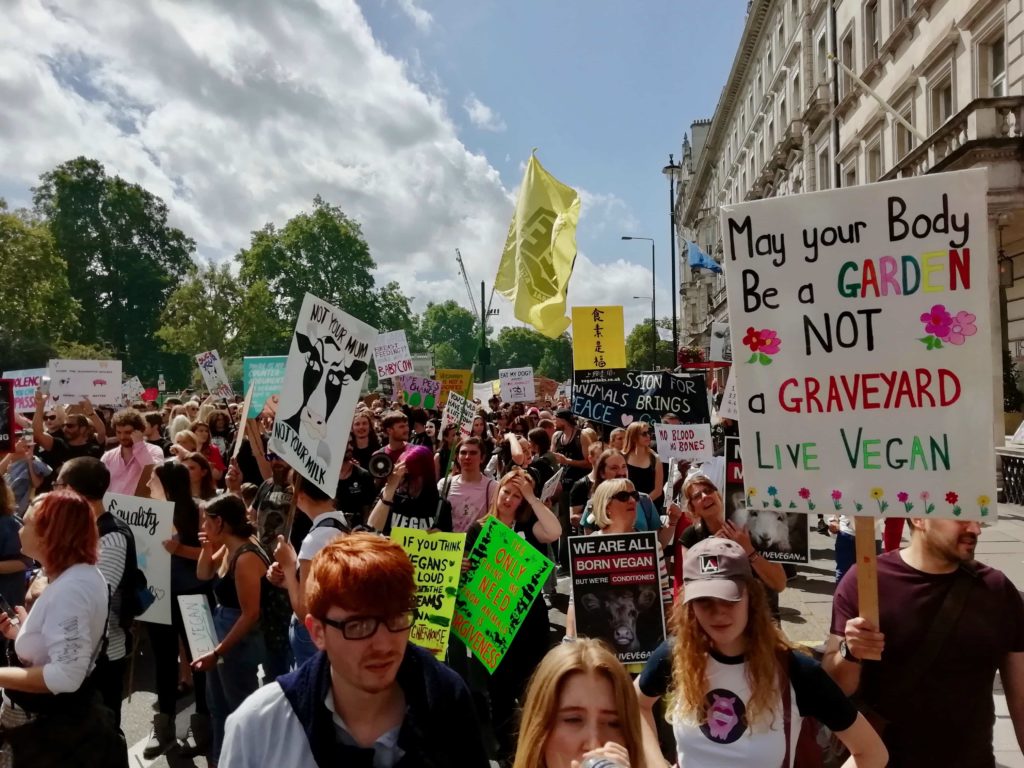 Routes are always published nearer the time but tend to head through the centre of the city, usually ending in a green space for the rally. In 2018 for instance, the London march ended in Hyde Park, while in 2019 we stopped en-route to blockade Trafalgar Square for an hour and finished in Parliament Square. At the end of the march, there’s a rally with speeches from well-known figures in the animal rights movement, including Ed Winters, actress Evanna Lynch and James Hoot from Animal Rebellion. 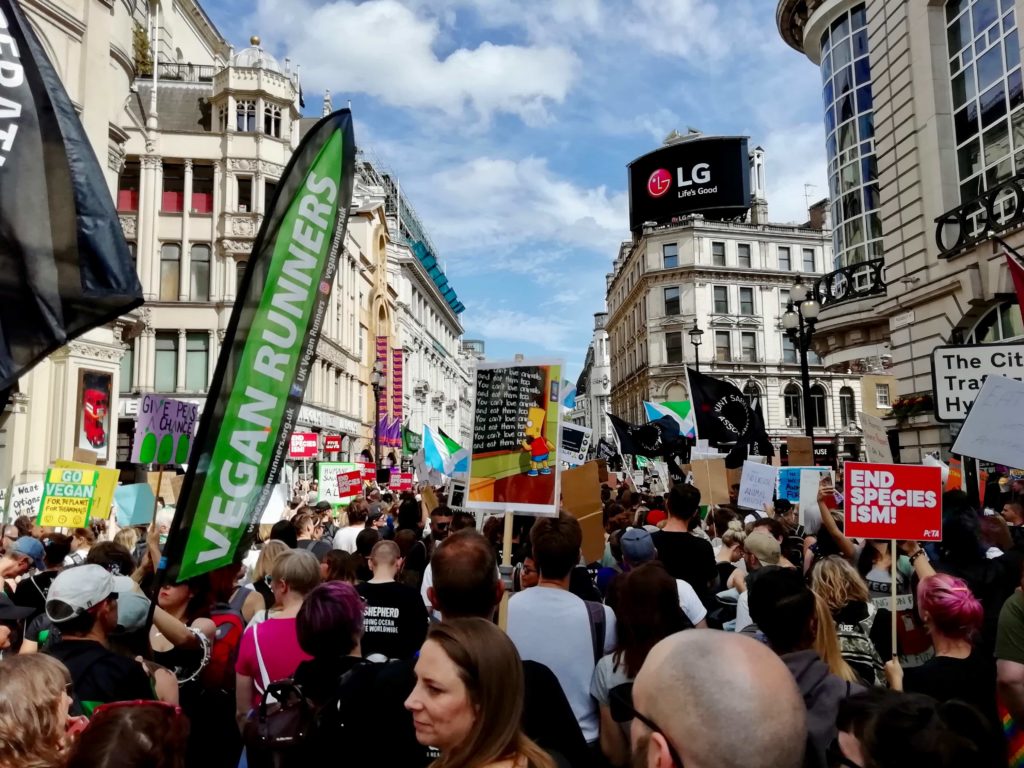 Why march for animal rights?

If you want to be part of a joyful, inclusive crowd of vegans and spread a peaceful message of animal liberation, the Surge Animal Rights March is perfect. It’s also an easy way to dip your toe into animal activism and learn more about how you can get involved in the movement. The event is organised in conjunction with the local authorities and is totally legal, there’s a police presence and you follow a pre-arranged route, with roads partially or fully blocked to traffic. 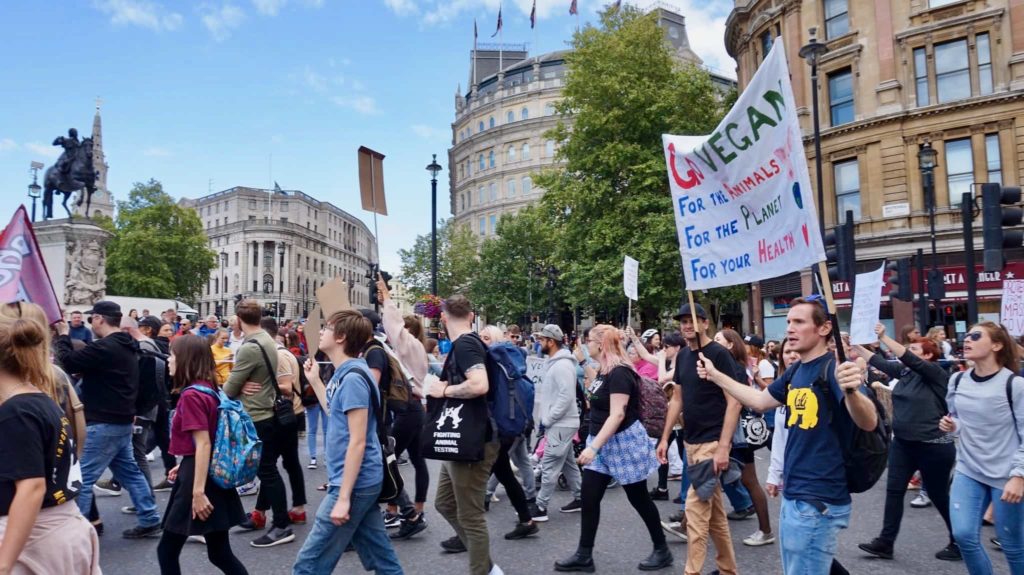 From my experience, the public are at best supportive and at worst indifferent – I’ve never seen any animosity or violence (which is why the event is usually ignored by the mainstream news!) so it’s an incredibly safe form of activism. 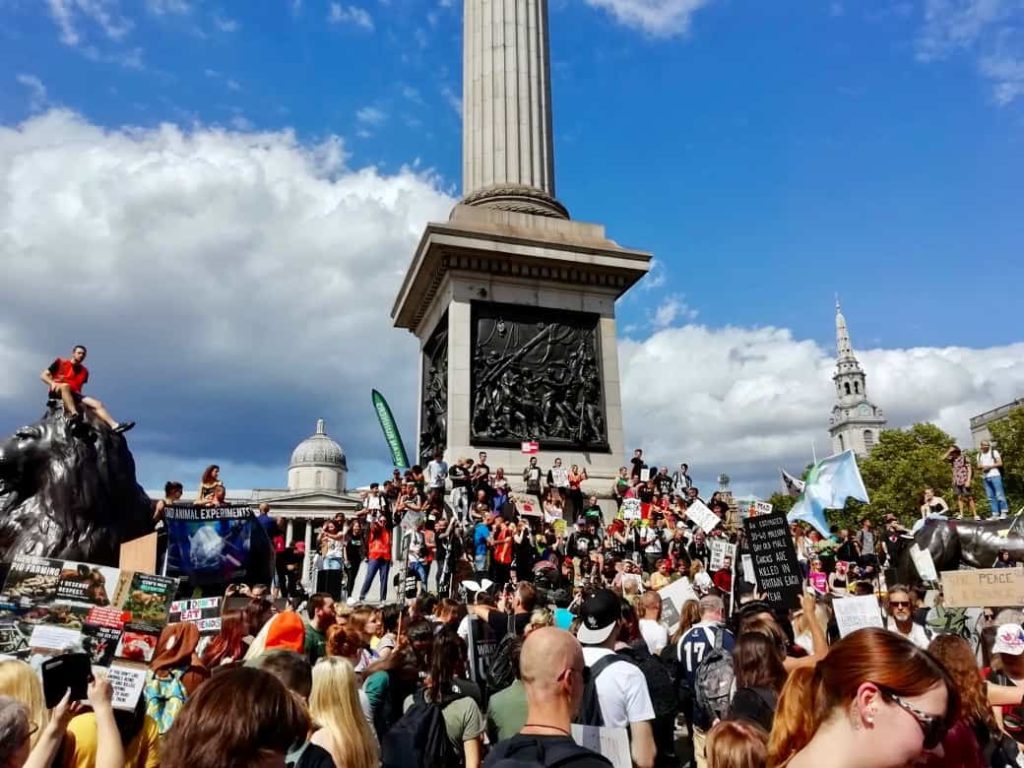 I joined the Animal Rights March London for the first time in 2018 and it was so powerful being surrounded by thousands of fellow vegans who I knew shared my passion for ending animal exploitation. Everyone is there with colourful, creative banners, wearing vegan t-shirts and even dressed up in costumes. Join in with the chants shouted on loudspeakers, follow the beat of the drums and other instruments, hand out leaflets to the public and bring your homemade banners to spread your vegan message. 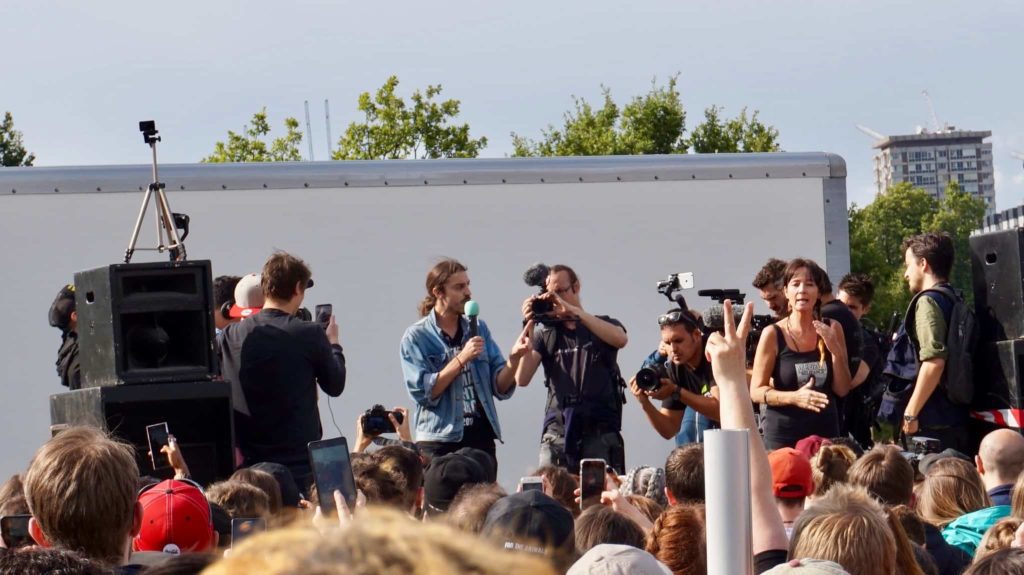 You can march with other or come alone; you’re bound to meet new vegan friends while you’re there. Bring some vegan food and plenty of water, as well as your banners, raingear and suncream. We always take plenty of photos as sharing on social media is a great way to show your friends and family what you believe in a non-confrontational way, it may even open a dialogue with them. This was my first animal rights protest London and I’ll go back every year. 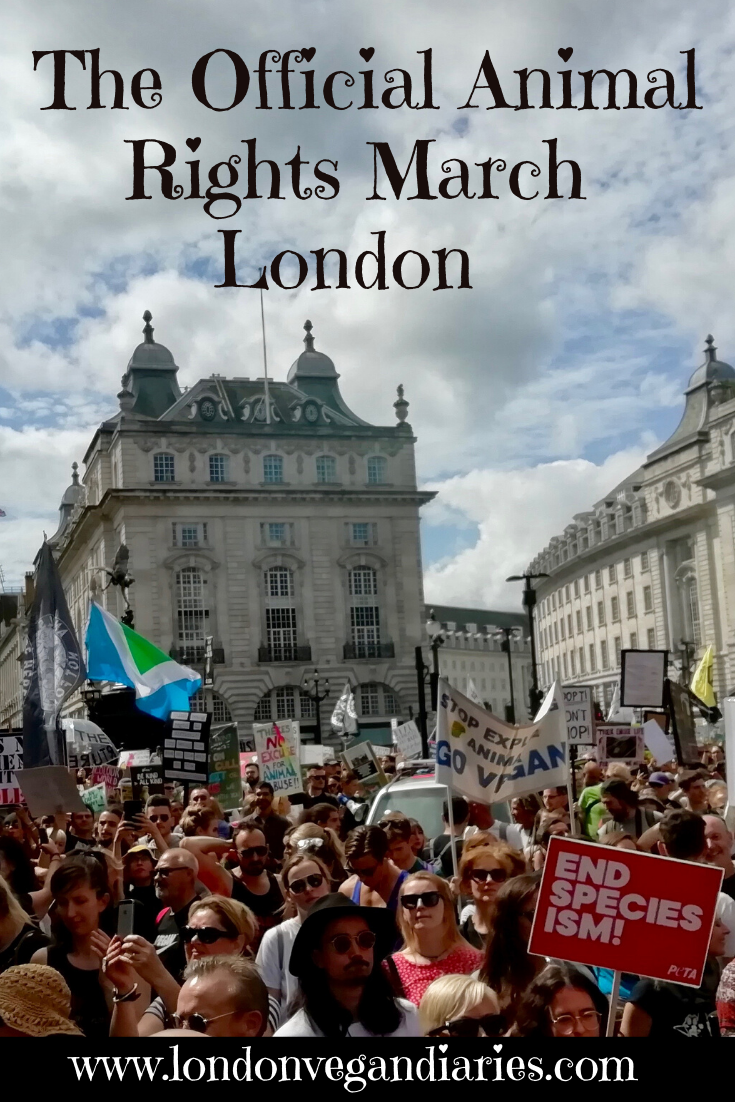 There are people from animal rights organisations there with leaflets, petitions and sign-up sheets, so it’s easy to make connections and get involved with the movement. One of my favourite parts is the rally afterwards where everyone sits on the grass and chills, listening to the many inspiring speakers talk about the progress we’re making towards a vegan world, give advice on how we can contribute and generally spread a happy vegan message.