Finding it hard to travel as a vegan? Then you’ll be pleased to know that there’s a growing number of hosts in the UK offering vegan accommodation complete with cruelty-free toiletries, plant-based breakfasts and furnishings that are free from animal products. From the Lake District to Cornwall, the Scottish Highlands and beyond, here’s a list of vegan hotels and B&Bs in the UK. 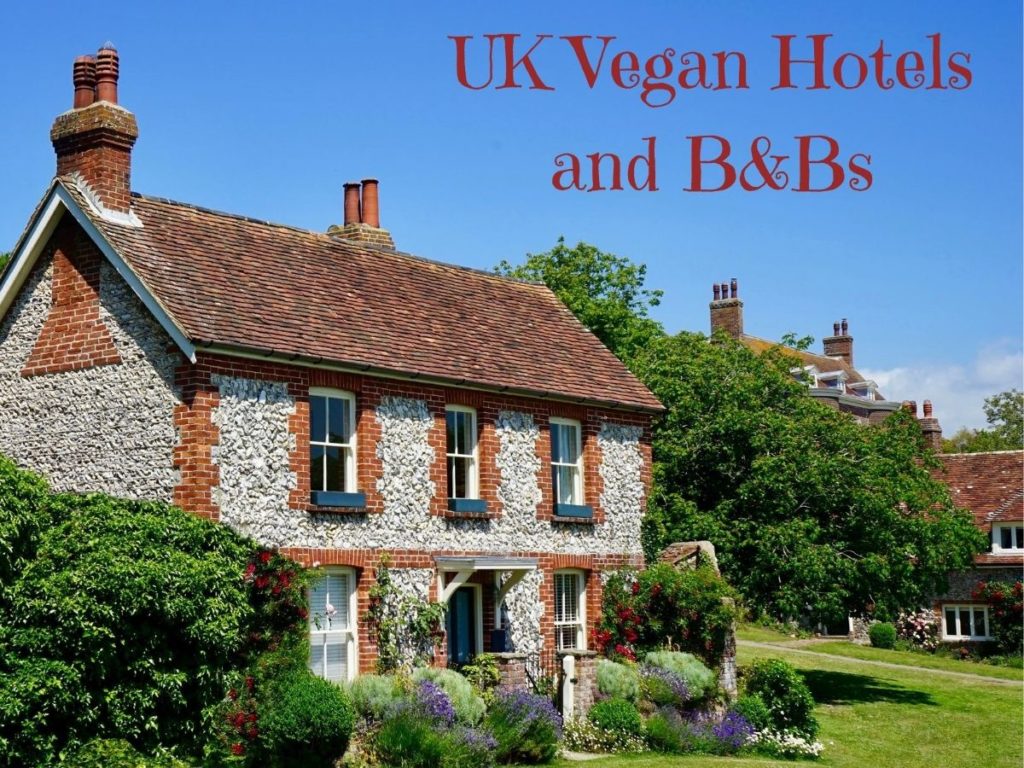 Goats and Oats at Garsdale

Set in the heart of the Yorkshire Dales National Park, Goats and Oats is surrounded by moors and mountains, with the Pennine Bridleway just outside the front door. Vegan owner Linda Bourke says: “We chose to move to the Yorkshire Dales due to the beautiful surroundings and to provide a place for vegans to visit without having to worry about what’s on the menu or what the people at the next table will be eating.” All toiletries and furniture are vegan, down to the bamboo mattress toppers, and air source heat pumps reduce the B&B’s carbon footprint. 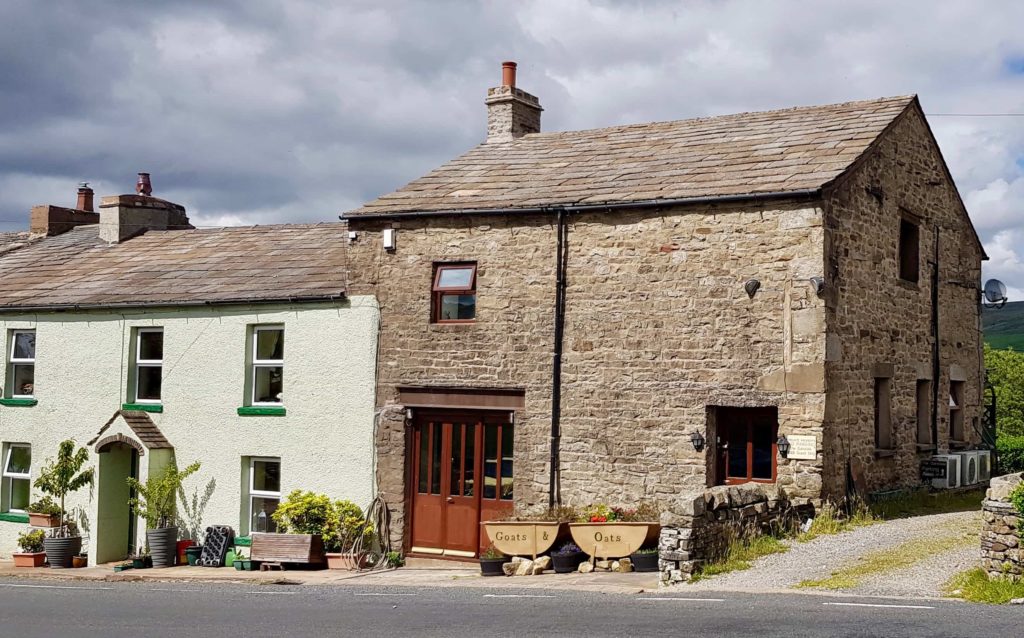 Stay in the converted barn, which has its own entrance, in one of three en-suite rooms: The Pennine, Lady Anne and the pet-friendly Bridleway. Slip into fluffy robes and slippers, enjoy some complimentary snacks, tea and coffee. Guests are served a choice of either continental or cooked full English vegan breakfast, included in the room price, and can request dinner for £10 per person. Linda also bakes delicious vegan pasties, sausage rolls, rock cakes and treats for snacks and packed lunches.

You know what you’re getting with Hilton, a quality hotel experience with top-notch service. The swanky Bankside branch in London features the brand’s first vegan hotel suite, which was created with help from the Vegan Society. The suite features 100 percent vegan-friendly materials, from chairs made from pineapple-leaf Pinatex material to pillows stuffed with buckwheat husks. Of course, the in-room menu features an array of vegan dishes. Situated near Southwark, the Hilton Bankside is just a short walk or tube journey to some of London’s top vegan restaurants.

Kings Reach Vegan B&B owners Sara and Sean MacLeod moved to Scotland in 2017 to escape the rat race, shortly after transitioning to veganism. They set up Kings Reach on the windswept west coast, two hours from Glasgow and close to many of Argyll’s historical sites. “The B&B had to be vegan because that’s the way we live our lives,” says Sara “However, you don’t have to be vegan visit, we hope staying here may encourage people to try a vegan lifestyle. I like to think that this is my little bit of vegan activism.” 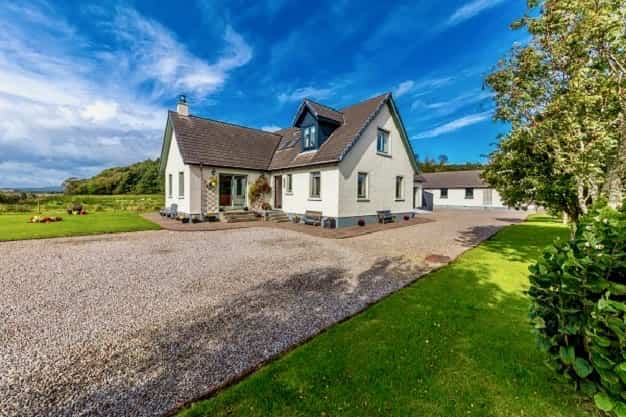 The two B&B rooms have a sitting area and en-suite bedrooms, as well as a shared garden with deck. Two self-catering cottages, the Shealladh and Dunadd and Crinan, are both two-bed and have open-plan lounges and kitchens. As well as offering homemade vegan food, Kings Reach is working towards zero waste and uses Ecotricity, a vegan green energy supplier. “All our cleaning products and toiletries are vegan and our soft furnishings are free of animals products,” adds Sara.

Made from local slate and stone, Michael House is over 120 years old and has been a B&B for the last 17. Vanessa Lackford and husband Simon took the property over in 2013, converting it to a fully-vegan B&B. “We welcome everyone at Michael House but serve only vegan food and request that only plant-based items are stored in the guest fridge,” says Vanessa. “The greatest accolade is from non-vegans who enjoy our food and who maybe start thinking about making changes in their own lives.” 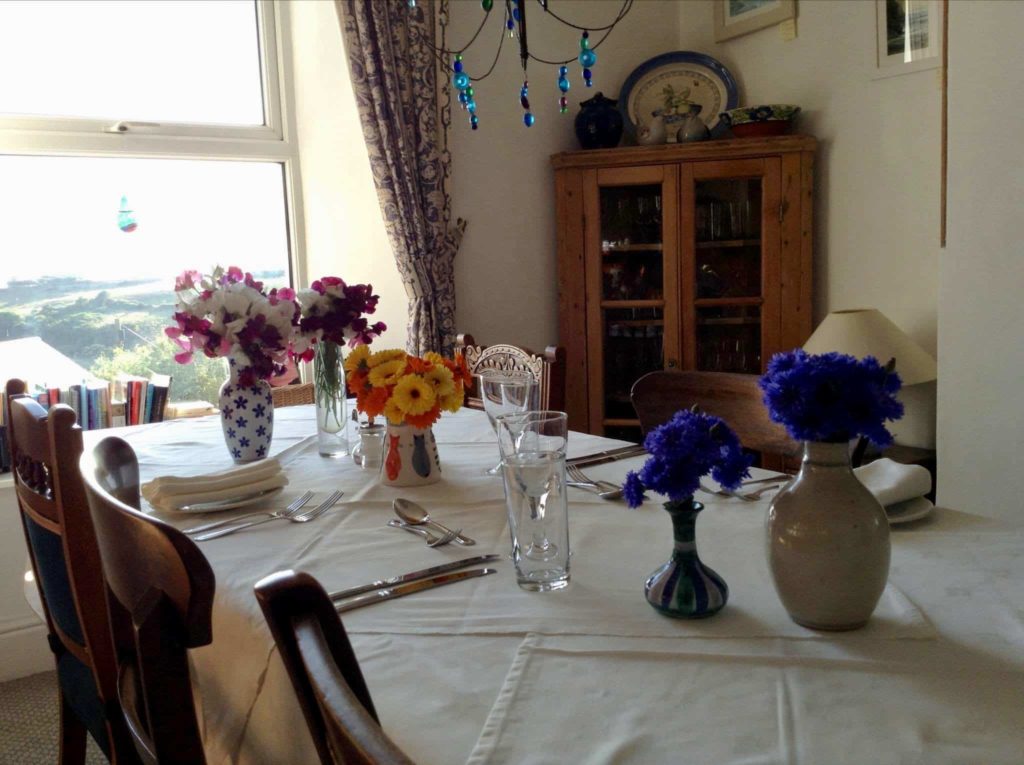 Michael House is known for its extensive vegan evening meals and cooked breakfasts, which feature fresh-baked bread, scrambled tofu, rosti, spinach and mushrooms, beans, tomatoes and sausages. The rooms are vegan furnished and there are two patio areas with views overlooking the sea. Michael House is situated on the north coast of Cornwall near famous Tintagel Castle, sandy Trebarwith Strand Beach and a coastal footpath just 10 minutes away.

Saorsa 1875 has been widely featured in the press as the UK’s first fully vegan hotel. Set in a 19th century Victorian gothic property, Saorsa oozes luxury with 11 uniquely-styled, vegan-furnished bedrooms and a lounge with roaring fire. Known as one of the best vegan hotels in the country, Saorsa 1875 is set in two acres of woodland in the Scottish Highlands and has a fine-dining restaurant serving local, foraged food and a selection of cocktails and craft beers. Everything is vegan in Saorsa 1875, from the bedding to cleaning products and electricity. It’s also dog-friendly and even offers vegan cookery classes.

This small B&B is set in the cute market town of Ulverston, on the edge of the Lake District. Explore the Cumbria Way trail, which lies just steps from the front door. Vegan couple Dan Miller and Kelsey Peters opened Little Sansook in 2019 after falling in love with Ulverston. “We had just returned to the UK from five years of living abroad and travelling and wanted to do something exciting” says Kelsey. “It was while living in Vietnam in 2016/17 where the dog and cat meat trade is still a thing that the penny really dropped: the only way to stop animals suffering in the meat industry is to stop eating them.” 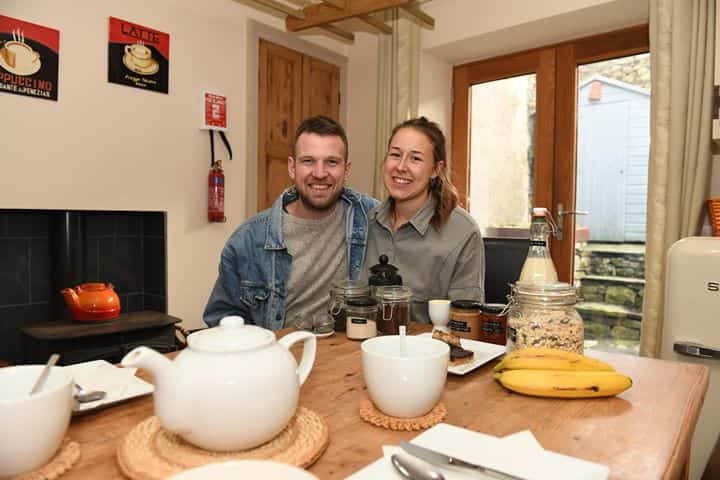 Guests usually stay for at least two nights and have the entire top floor of the property to themselves, which includes a double bedroom with en-suite shower room and toilet, as well as a private lounge with widescreen TV, fridge and tea and coffee facilities. An extensive vegan breakfast is included in the room price, either a continental spread which includes homemade jam, peanut butter and muesli or a full-on cooked breakfast. Little Sansook is also a dog-friendly property that is working towards zero waste and avoids single-use plastic.

This self-contained barn conversion with its own entrance is located in rural Somerset and is a brand-new vegan business that’s just reopened after Covid-19. Guests can enjoy an open-plan living space with dining area and kitchen, as well as a separate bathroom and bedroom with super king-size bed. A double sofa bed allows for up to four guests and there’s a sun lounge overlooking the garden with orchard and vegetable plot. 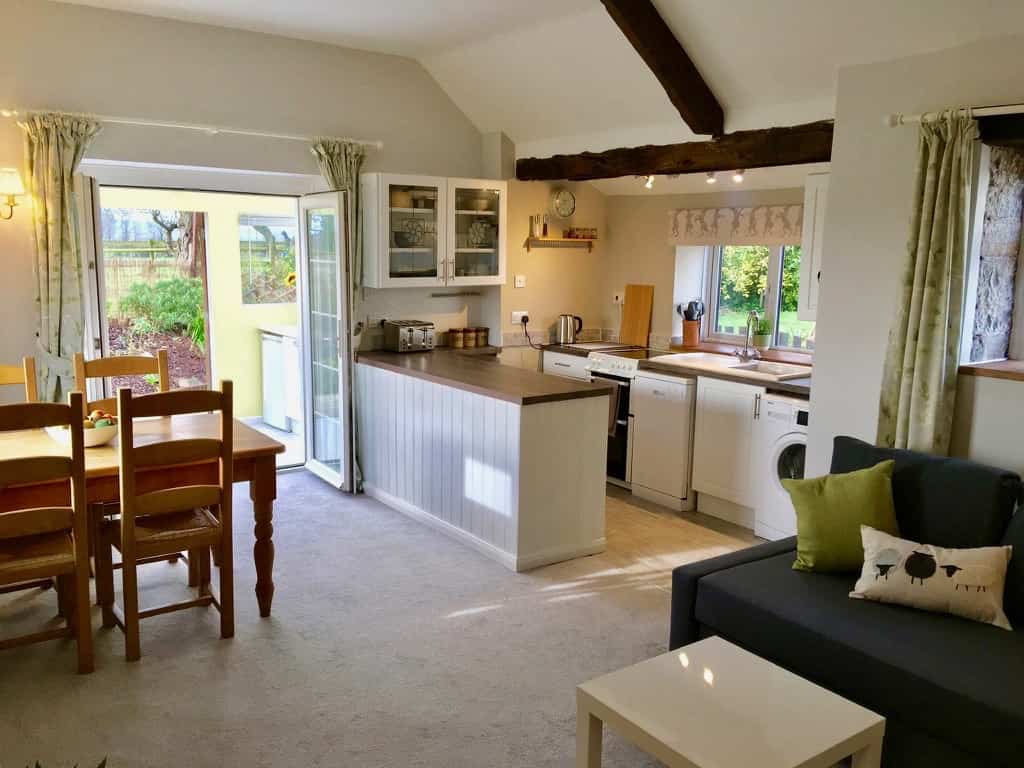 Owner Joanna Davis, who became vegan in 2017 and believes the lifestyle helped husband Andy survive a rare form of cancer, says: “We state on our Airbnb listing that guests do not have to be vegan to stay, but we request as part of the house rules that no animal products are consumed whilst at the property.” The couple have tried to make everything in the property vegan, including toiletries and eco-friendly cleaning products.

If you’re looking for a traditional seaside holiday, Peasholm Park in Scarborough is a great option. Set on the North Yorkshire coast near North Bay Beach, this vegan bed and breakfast lies opposite Peasholm Park, an oriental-themed oasis with woodland walks, pagoda, a boating lake and Buddha statues. You’re also close to attractions like Scarborough castle, Staithes and South Bay.

There are nine en-suite rooms available that have been newly refurbished and have flat-screen TVs as well as vegan toiletries and a vegan-friendly guide to the area. Guests can also relax in the conservatory and breakfast on a buffet of fruit, cereal and toast as well as a full cooked vegan breakfast. All cleaning products are vegan and the B&B is supplied with green energy from Ecotricity.

The Field Shelter is run by Jojo of Ethical Vegan Life, who bought land near Kirkmichael with the intention of rewilding and later rescuing farm animals once the business is profitable. At the moment, it’s an attractive B&B powered by renewable energy with cruelty-free toiletries, baked vegan treats on arrival and a stellar Scottish breakfast of homemade vegan bacon, tofu scramble, Lorne sausages, potato scone and all the trimmings.

Stay in an atmospheric Grade 2 listed building in Lincoln, home to a medieval cathedral, castle and surrounded by acres of pristine countryside. After a long day of sightseeing you can relax in the homely lounge, which has a TV and log burner. Twigs and Leaves B&B provides dinners as well as a complimentary breakfast featuring homemade bread and butter, yogurt, cereal and fruit or a full-cooked menu. 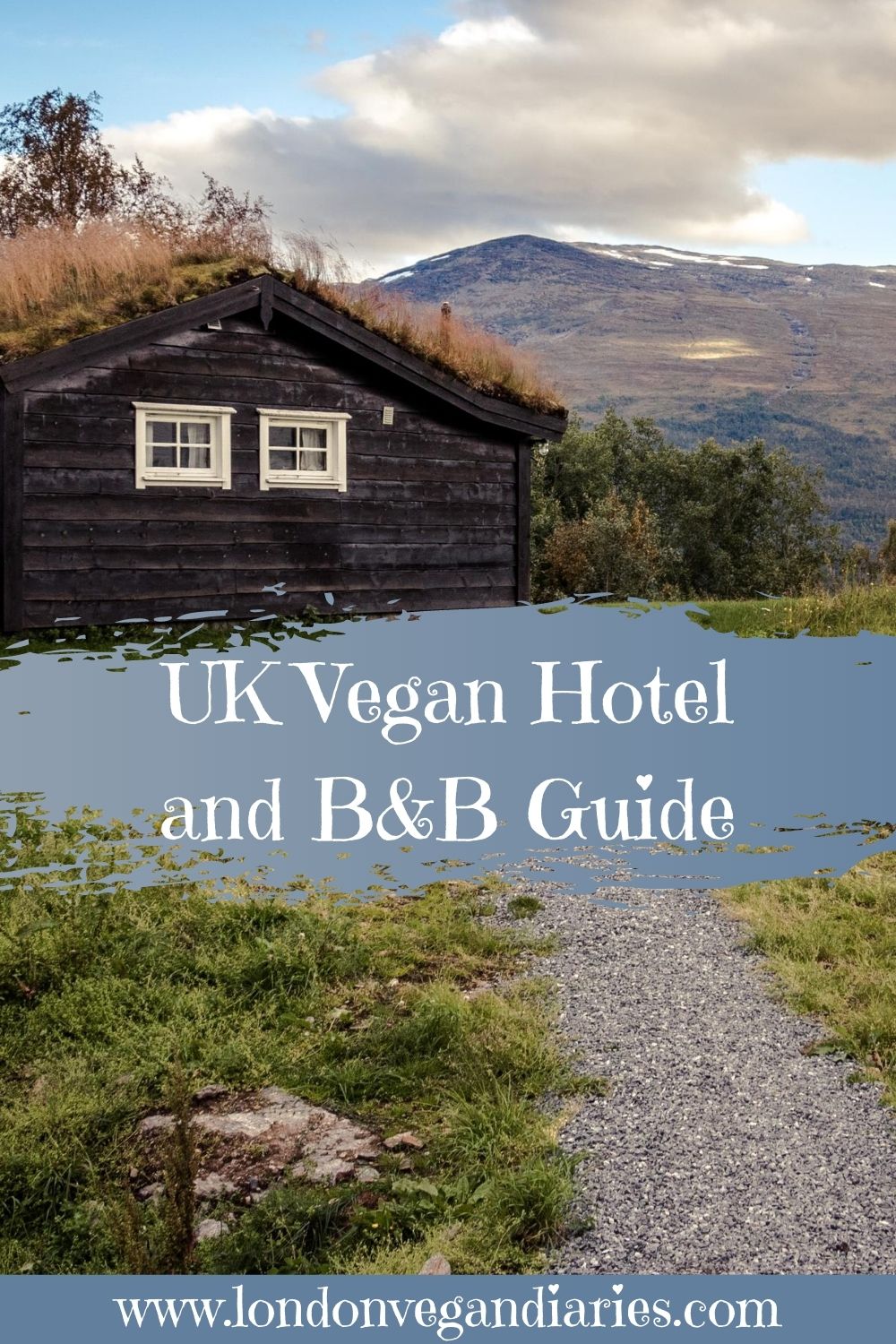 More top vegan hotels and B&Bs in the UK