The UK Vegan Campout is the largest of its kind in the world, drawing thousands of campers. Come for a weekend surrounded by fellow vegans and full of inspirational speakers, activism workshops, delicious food stalls, music and parties. 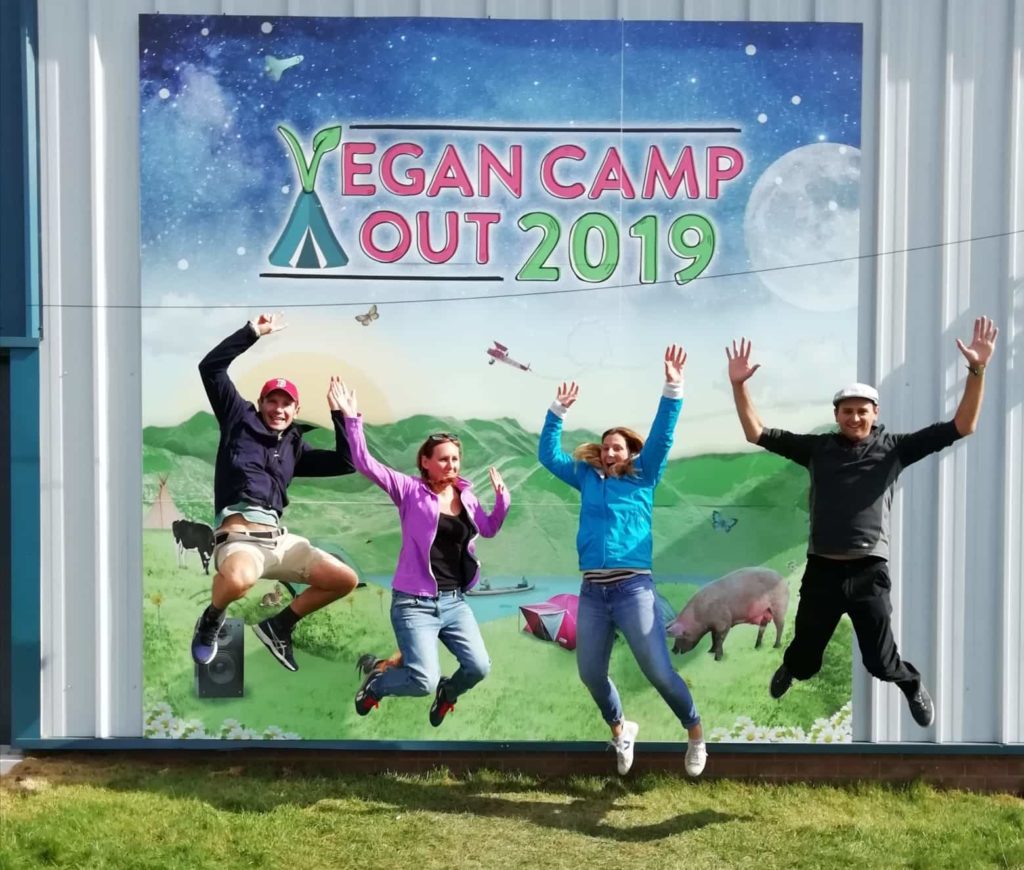 What is the Vegan Campout UK?

Launched in 2016, the very first Vegan Campout was held in a field with just 400 people, one food vendor and an outdoor DJ. Since then, it has morphed into a huge event, attracting over 7,500 from over 40 different countries in 2019. The Campout is sponsored by Viva, a vegan charity that runs undercover investigations and campaigns to expose factory farming. 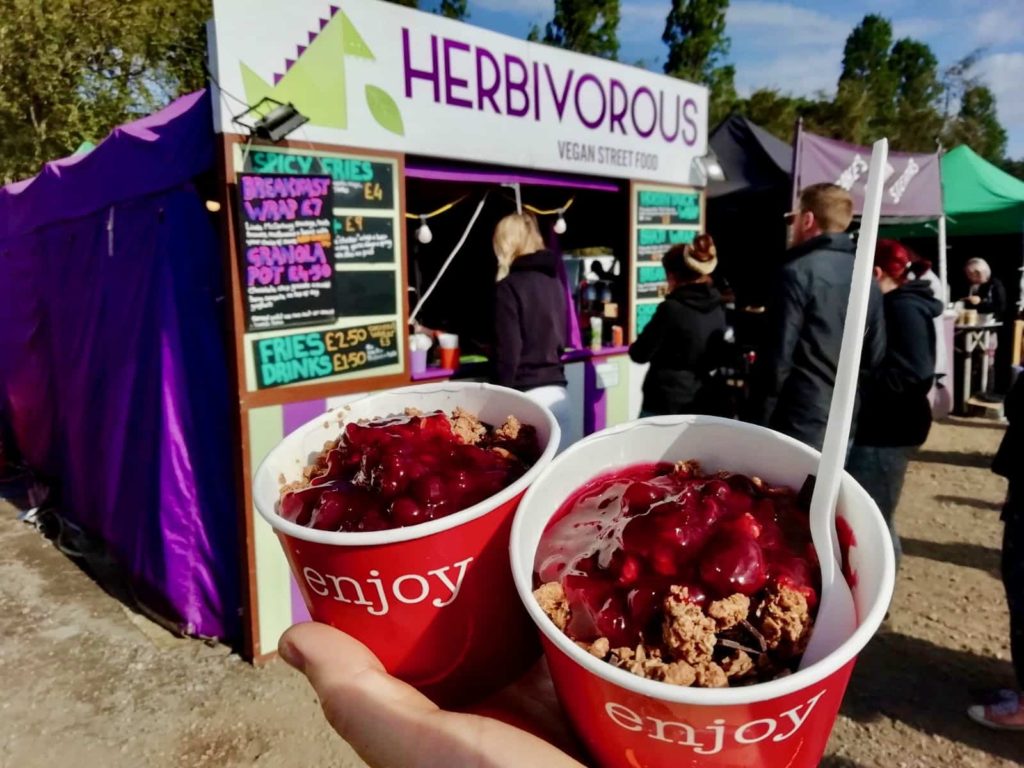 Held over three days in August, you can come with a tent, campervan or caravan and there are dozens of food stalls dishing up everything from vegan pizza and burgers to world cuisine, cakes and gluten and raw options. As well as some market stalls, you can enjoy live music, DJs and after parties, as well as a family area and yoga and fitness classes. 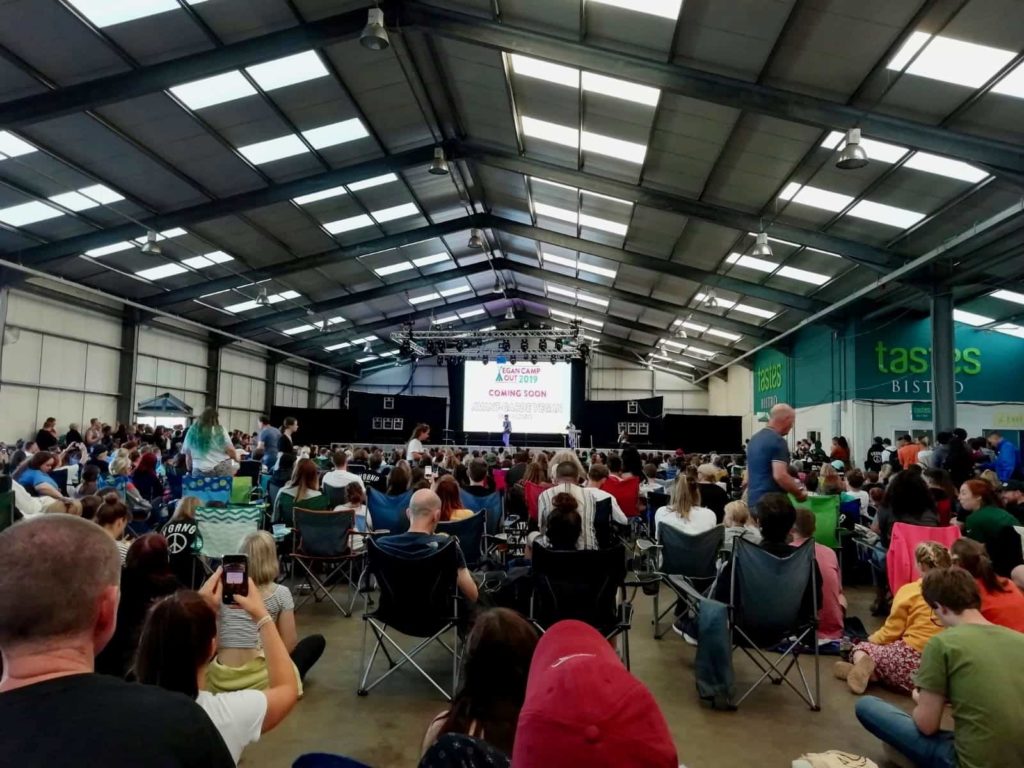 There’s a packed programme of motivational speeches including some of the best names in the vegan movement on the main stage, which has hosted the likes of Earthling Ed, James Aspey, That Vegan Couple and Dr Michael Klaper. In addition, there’s a smaller activism tent where workshops, talks, panel discussions and seminars are held throughout the weekend. 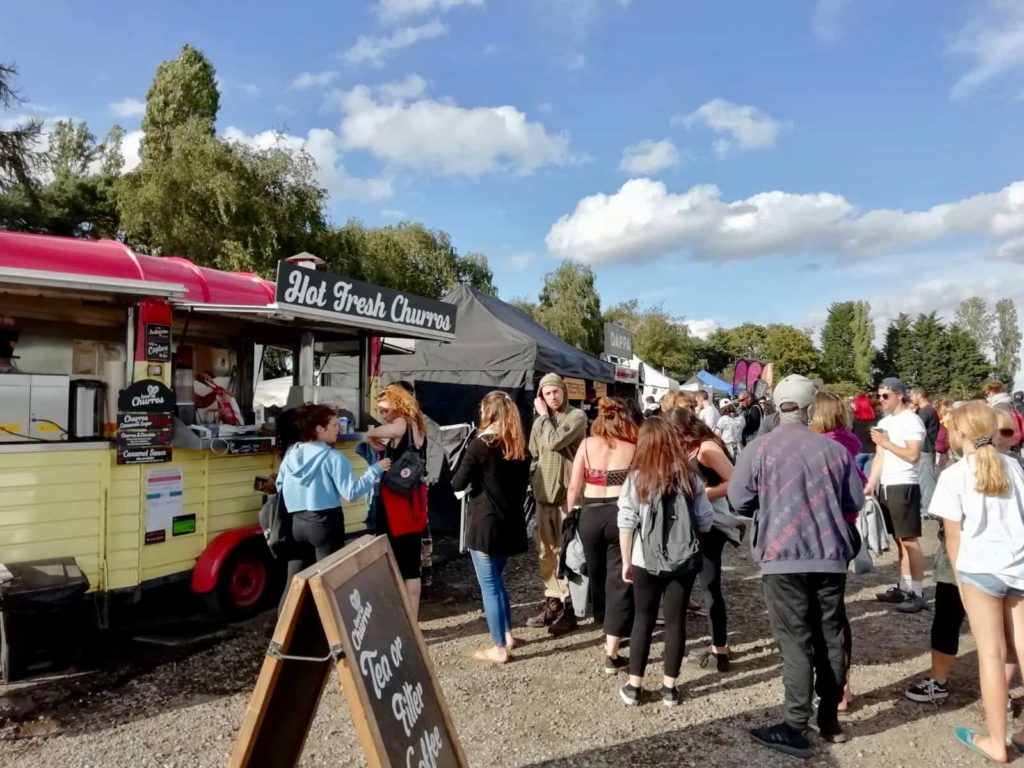 2020’s Vegan Campout is currently still scheduled to go ahead, although it may be postponed or cancelled due to Covid-19. The line-up to date includes:

When and where does the vegan camp out take place?

In 2020, the Vegan Campout is scheduled for the 21st  to the 23rd  August, although it may be postponed due to Covid-19. The event is held at Newark Showground in Nottinghamshire and is open to all ages but under 16s must be accompanied by an adult over 18. If you’re coming by train, Newark Northgate and Newark Castle stations are both three miles from the showground. The website also lists car sharing options. 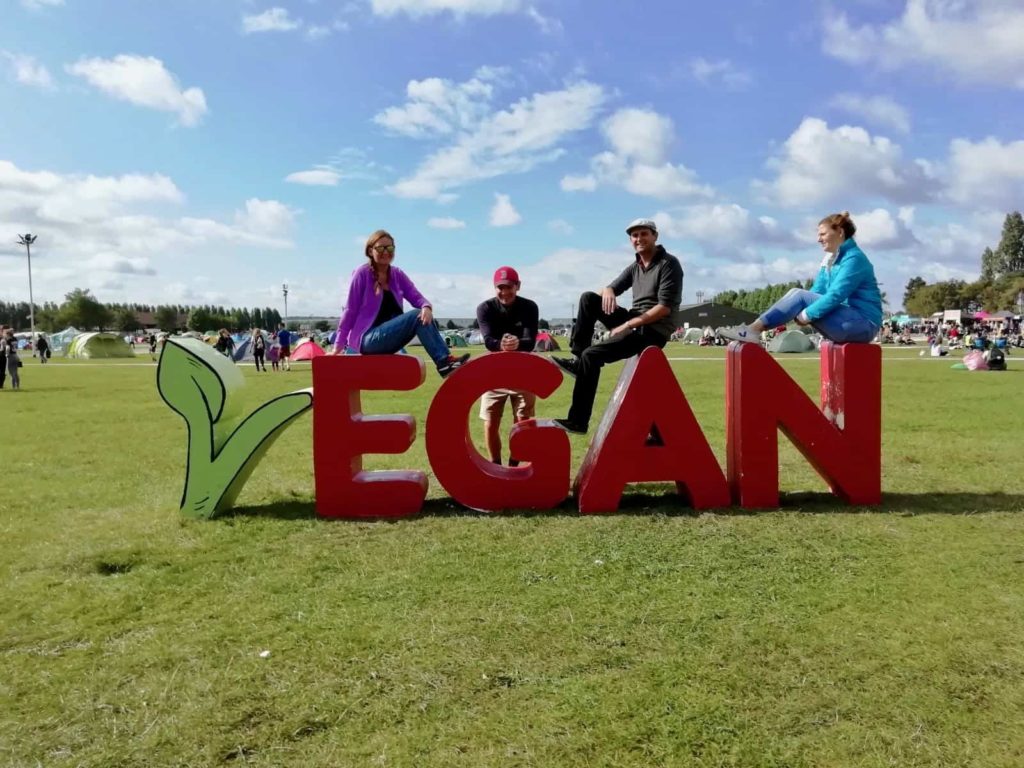 You can buy tickets from the official UK vegan campout site for this year (all are issued as e-tickets) and check for event updates on their Facebook page and Instagram. Tickets cost £50 for adults, £25 for kids and 0-3-year-olds go free. This price includes camping for the weekend – bring your own tent, caravan or camper. 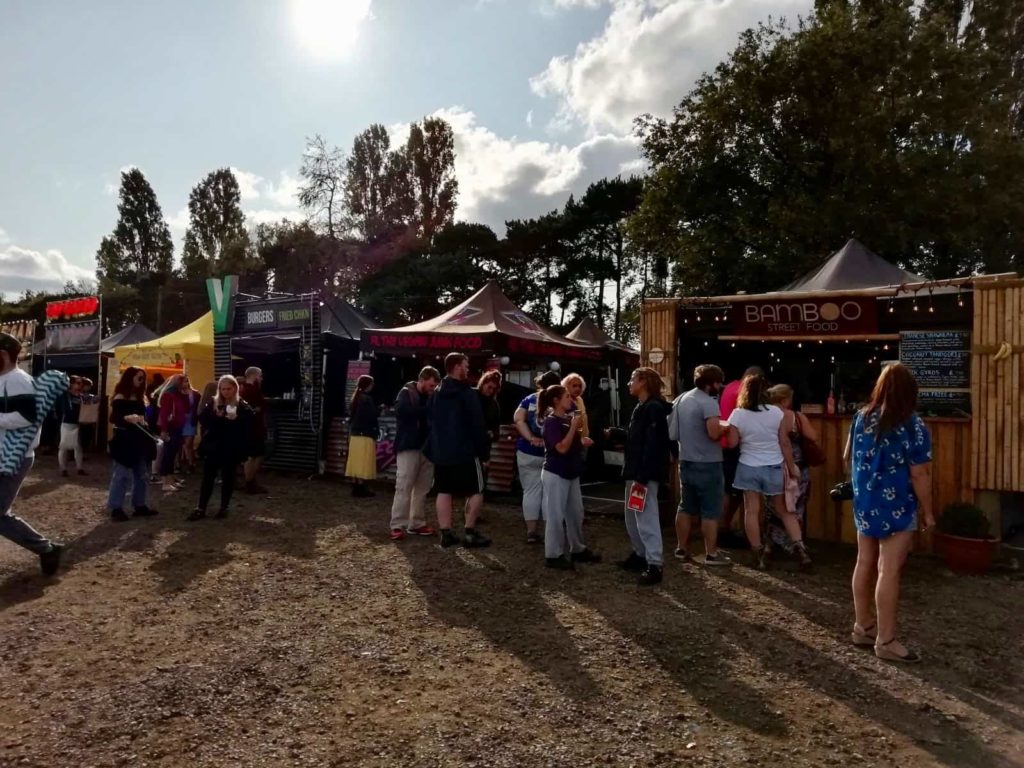 The event starts at 2pm on the Friday and ends at 2pm on Sunday and is open 24/7 so you can come and go anytime. If you’re coming by car, you’ll need to pay for parking, which costs £10 for the whole weekend if you buy it online or £15 on the day. The car park opens at 1pm on Friday.

Why attend the vegan campout?

The Vegan Campout 2019 was my first and it exceeded all my expectations. It was amazing to be surrounded by like-minded people and celebrate a vegan lifestyle. There was a relaxed festival feel with lots of happy, smiley faces and aside from one downpour, the weather even behaved itself. 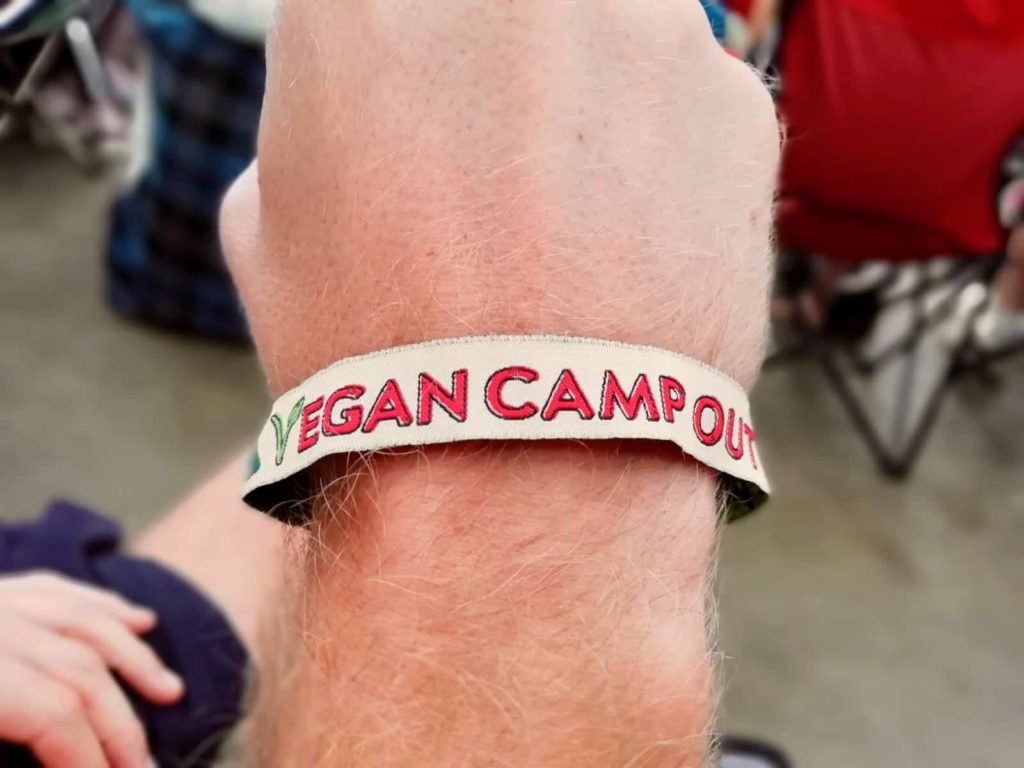 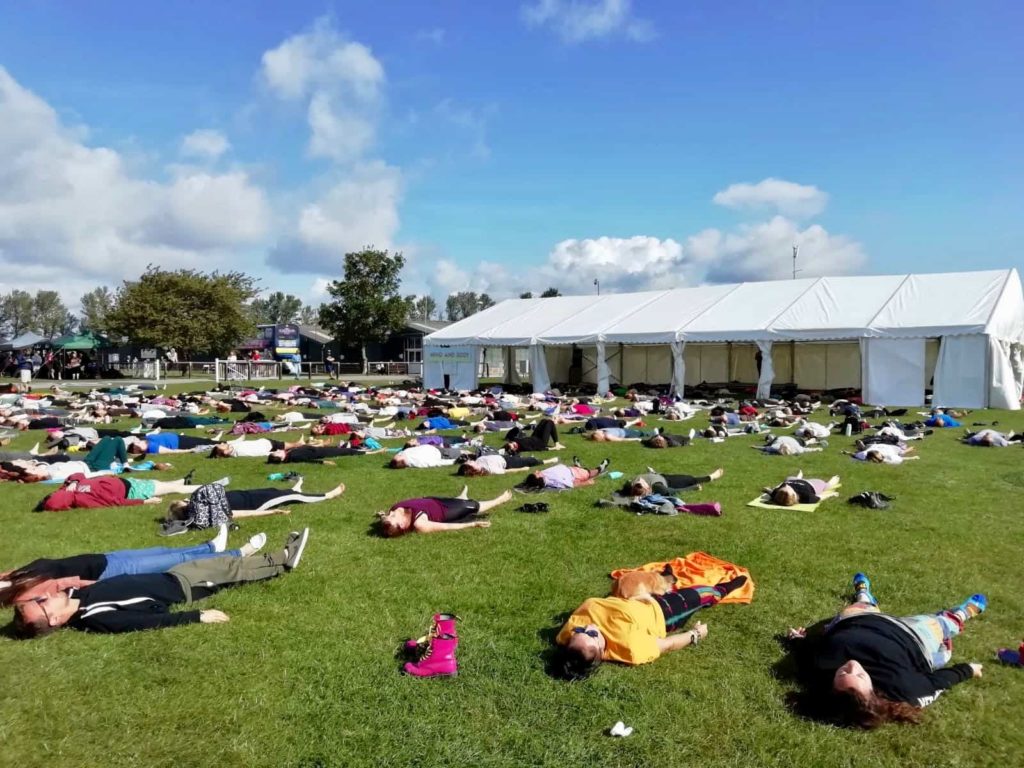 The event felt so inclusive, open to all ages and demographics. There was also a family area with tailored games and activities, as well as a  quieter camping area. In contrast to other festivals I’ve been to, guests were extremely respectful when it came to disposing of rubbish and being courteous to each other. All the bins were 100 percent recyclable so nothing got sent to landfill and vendors were all plastic-free. 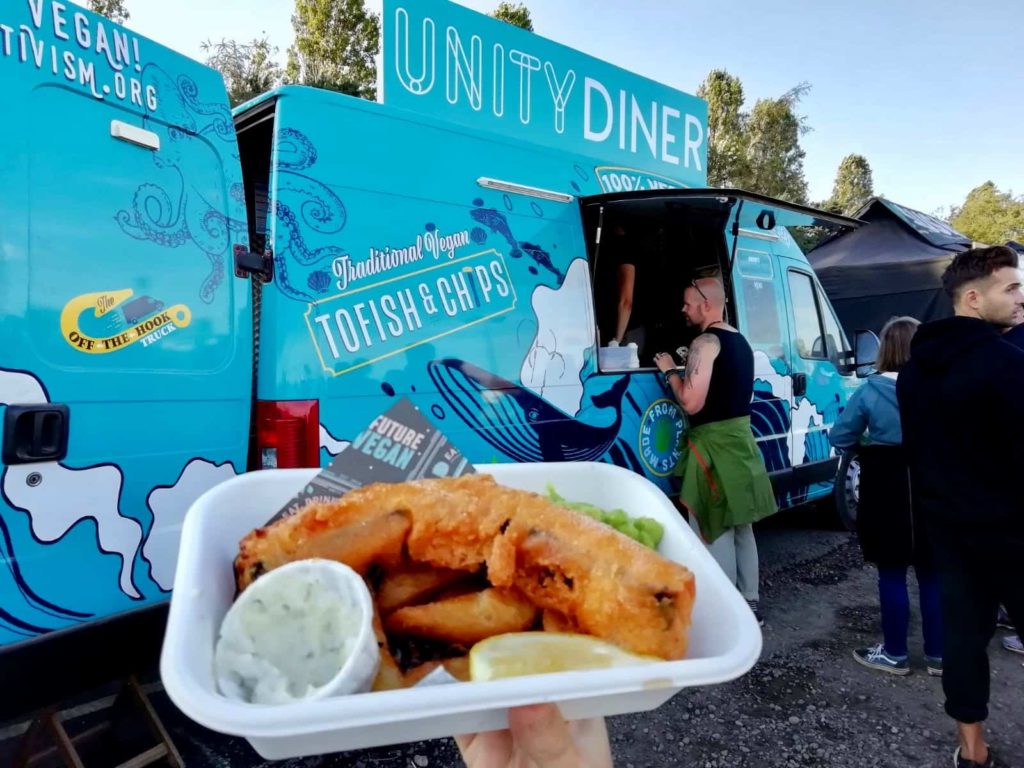 It was great not to have to worry about searching out vegan food options and we enjoyed everything from berry breakfast pots and vegan almond croissants to hot dogs and churros. We even queued for an hour for Unity Diner tofish and chips, which were served by one of our activist heroes, Earthling Ed (it was well worth the wait!). 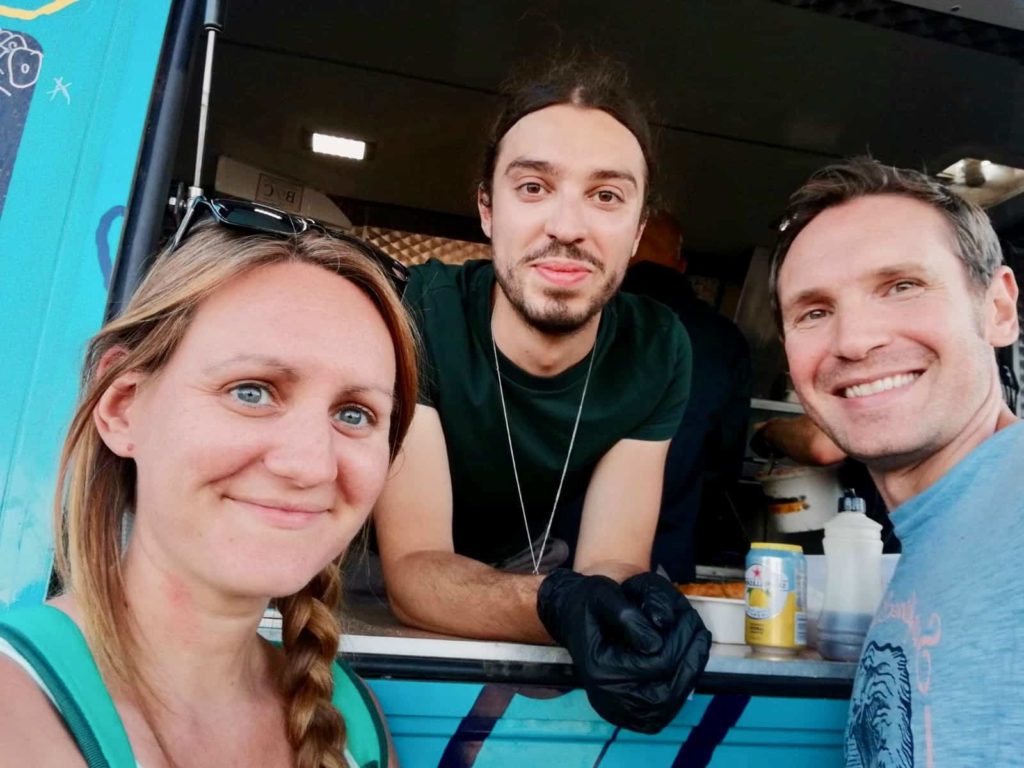 Being served by Earthling Ed!

What I love most about the Campout is that you’re free to make the event your own. Attend as many speeches and workshops as you like and stay up partying all night or spend the evening in your tent and get up early for yoga classes. You can bring and cook your own food if you’re on a budget or test out every tasty vegan delight you can afford from the food stalls. 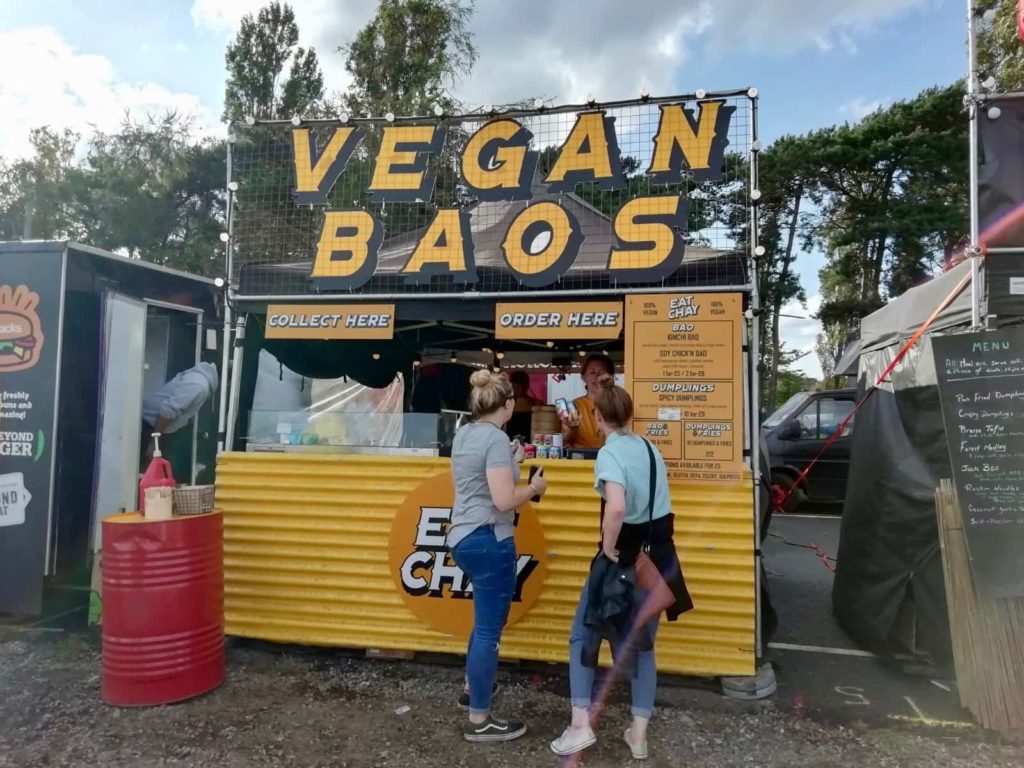 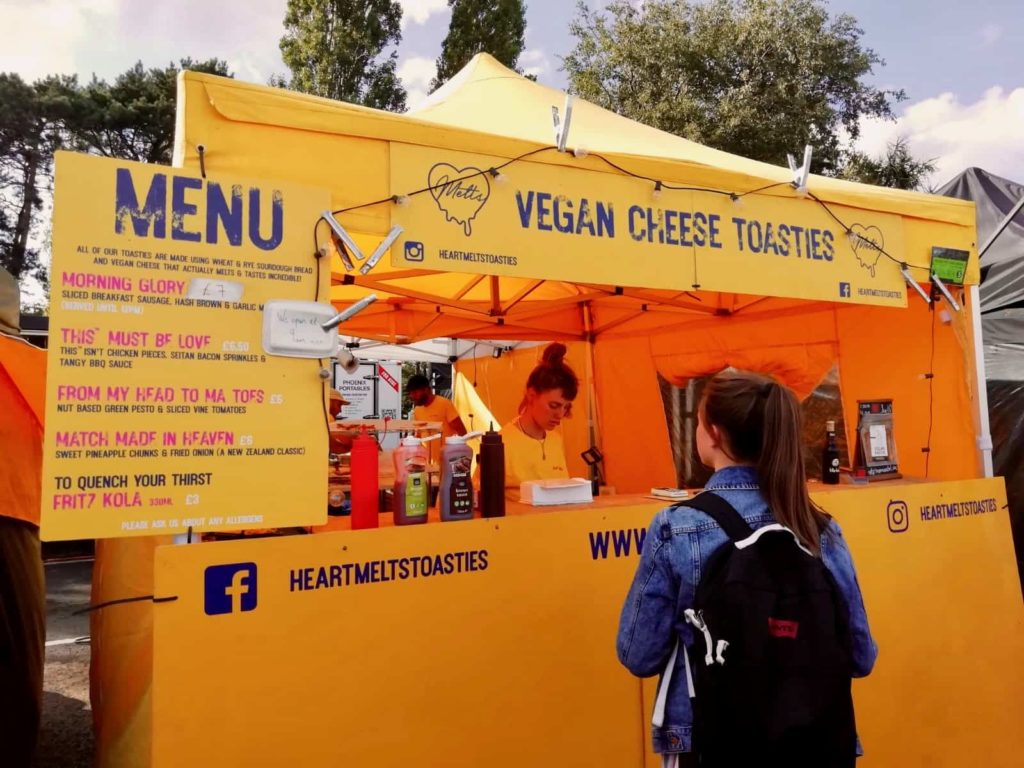 I attended with my partner and friends and we spent quite a bit of time in the main stage area. Although we arrived too late to catch Ed, we did get to attend speeches by That Vegan Couple, Mic the Vegan, Avant Garde Vegan and James Aspey, who gave an emotional closing speech on Saturday night and got the whole tent chanting: “Vegans are unstoppable, another world is possible.” 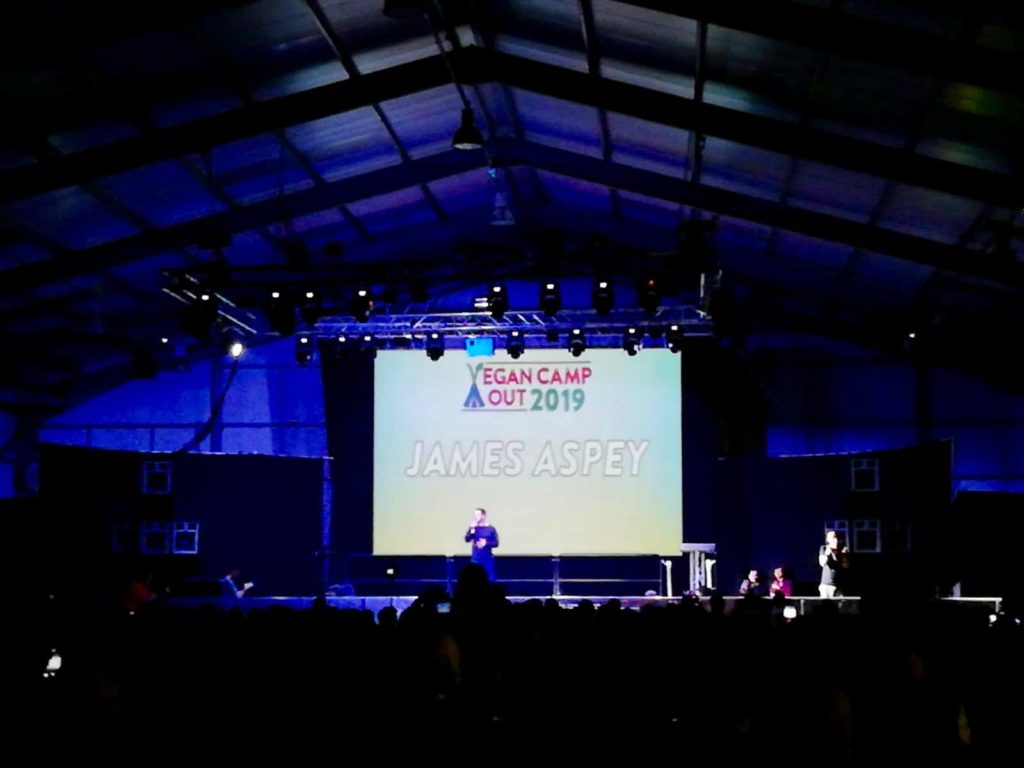 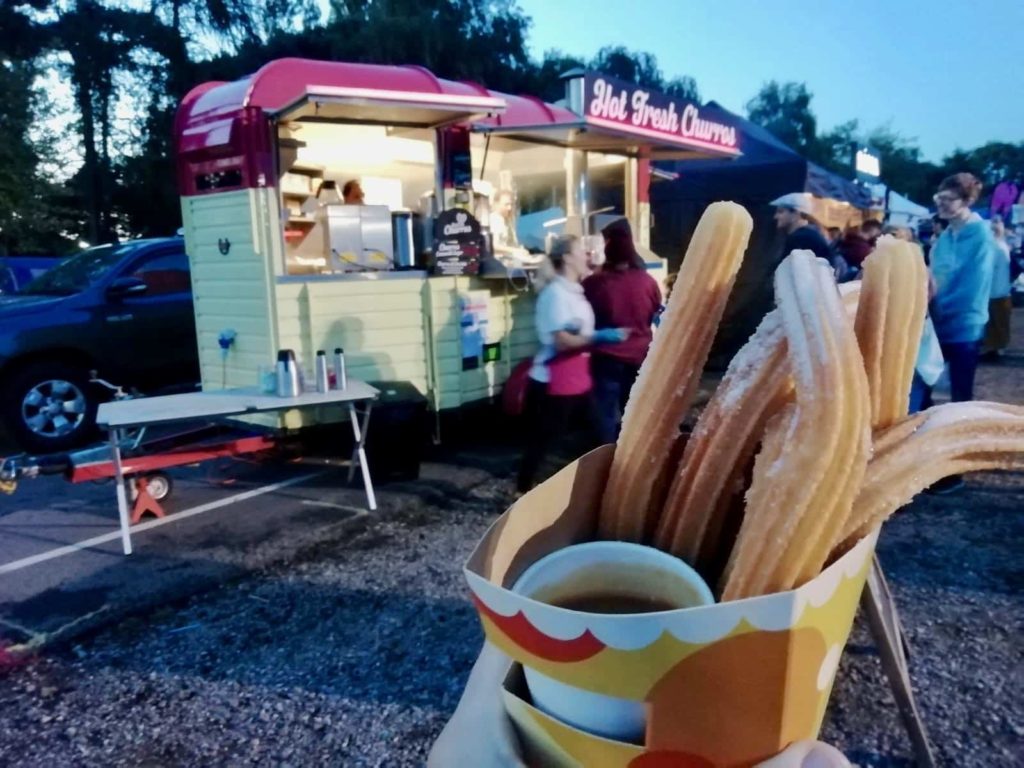 I only wish we’d had more time to attend other events in the activism tent, although we did get to the Anonymous for the Voiceless workshop and listened to an introductory talk from Animal Rebellion. This was so motivational that we signed up to the mailing lists and later joined in with Animal Rebellion activism in London that autumn, including the blockade of Smithfield’s Meat Market. If you want to learn more about activism, the Vegan Campout is a great place to start. 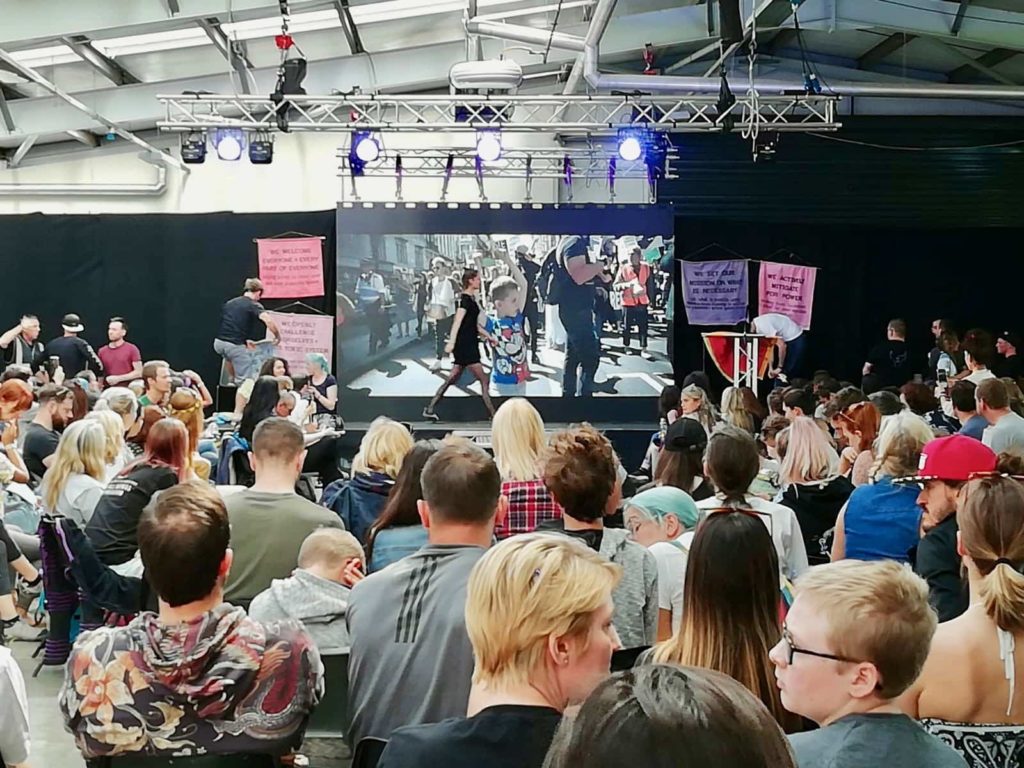 Here are some tips I picked up from my first Vegan Campout experience: 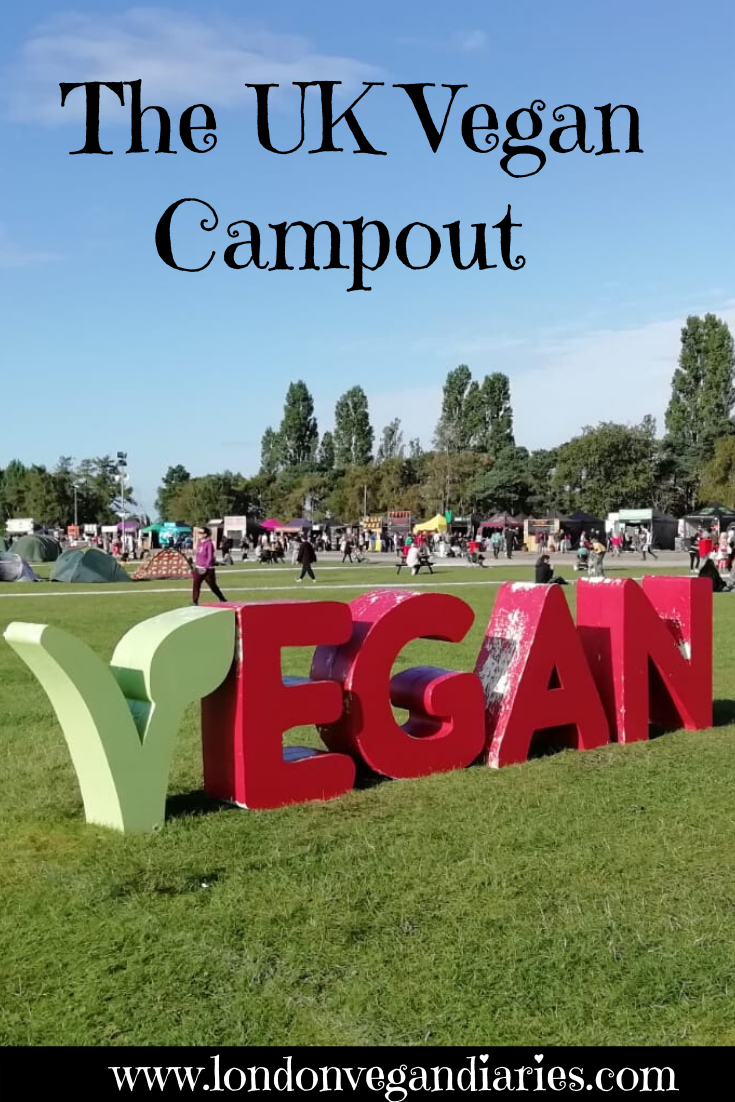