Want to rebel against animal agriculture and the havoc it wreaks on the environment? Then join Animal Rebellion, a movement for social and climate justice that aims to end fishing and animal agriculture through non-violent protest. In autumn last year, Animal Rebellion started their campaign by shutting down Smithfield’s meat market and taking its message to the streets of London and the doors of government. 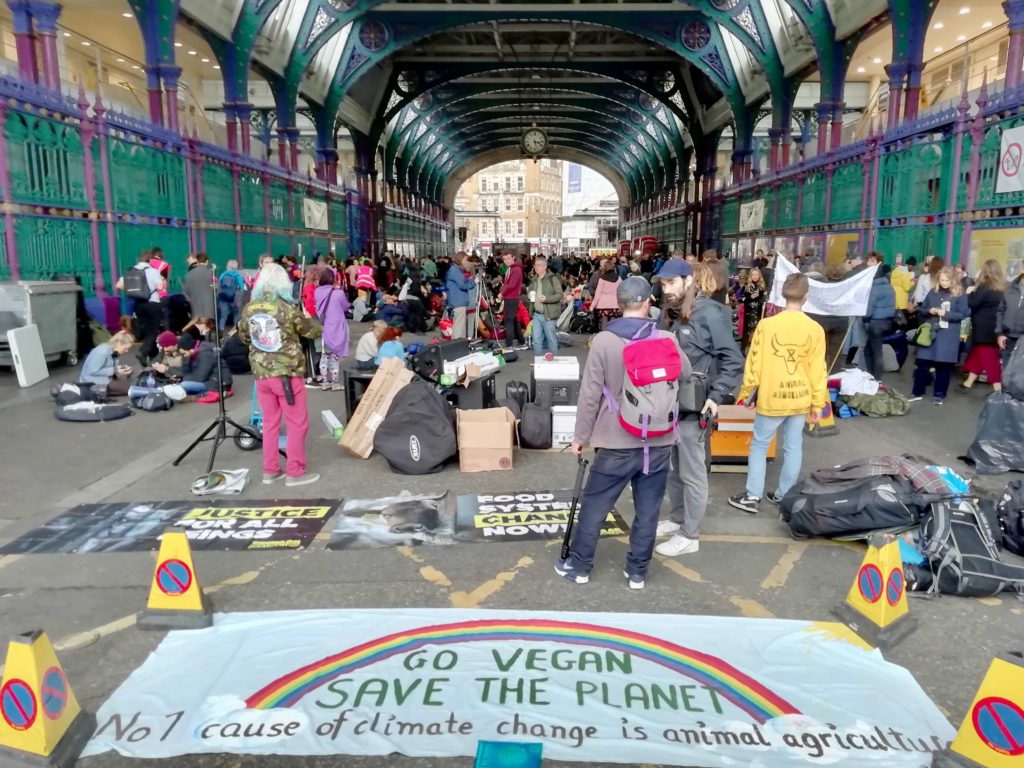 What is Animal Rebellion?

Remember the Extinction Rebellion (XR) protests in 2019 where environmental protestors occupied the streets of London, demanding the government declare a climate emergency and commit to reaching zero greenhouse gas emissions by 2025? Animal Rebellion are an off-shoot of this movement that defines itself as:

“A mass volunteer movement using non-violent civil disobedience to help the transition to a plant-based food system, as an attempt to halt massive extinction, alleviate the worst effects of climate breakdown and ensure justice for animals.” 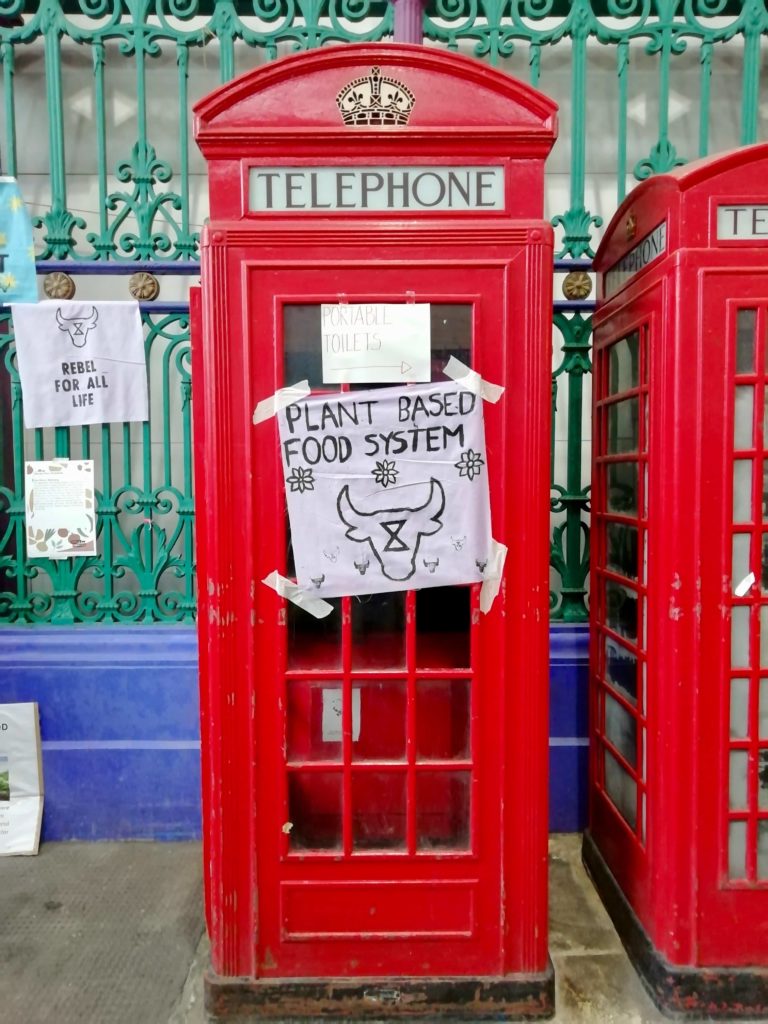 During the autumn protests in London, the non-profit group (sometimes known as Animal Extinction Rebellion) acted in solidarity with XR while organising their own separate actions to raise awareness about the link between animal agriculture and climate change. Namely, that fishing and animal agriculture are the leading causes of deforestation, extinction, ocean dead zones, water scarcity, soil erosion, air and water pollution and ecosystem collapse.

Simply put, Animal Rebellion’s message is that we cannot fight climate change without tackling animal agriculture and fishing and instead adopting a plant-based food system. 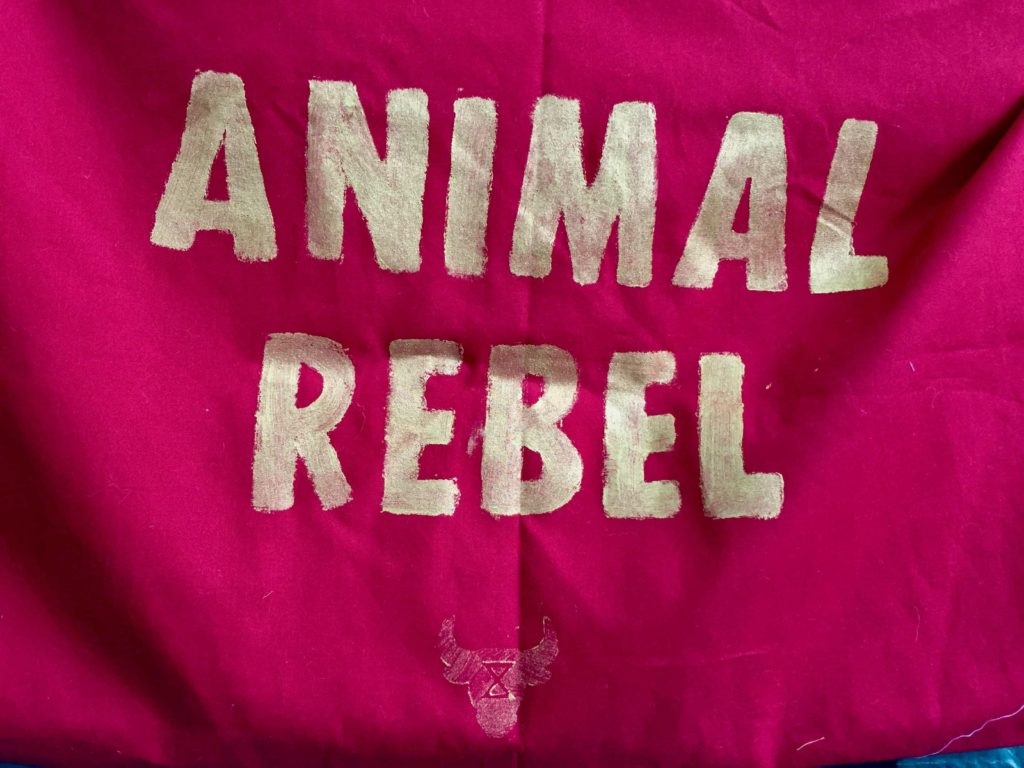 What are their demands?

Their strategy for achieving these demands is to use mass non-violent civil disobedience such as sit-ins, marches, occupations and blockades that cause economic disruption and raise awareness of the cause. In order to achieve real system change, previous social justice movements have proven that we need to mobilise 3.5 percent of the population in this way. 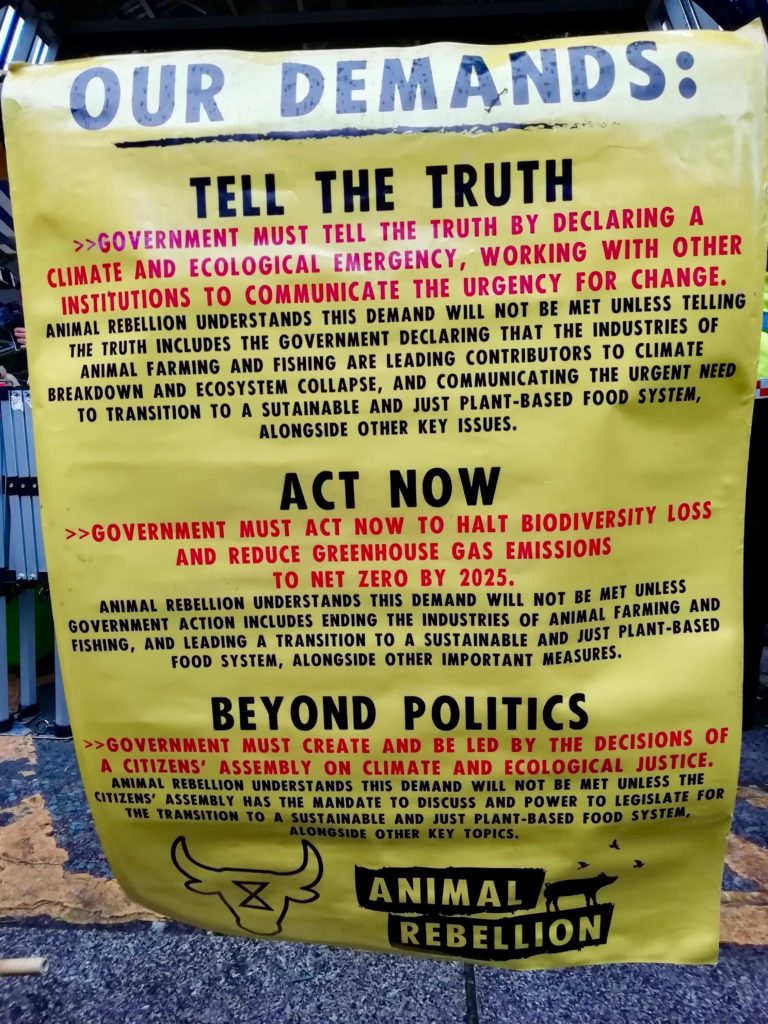 In line with XR’s values, there’s no head of Animal Rebellion. Rebels organise themselves into local affinity groups and work autonomously, engaging in acts of civil disobedience. You can find out more about their values here, but Animal Rebellion are a non-speciesist movement that welcomes everyone and is inclusive and non-violent.

What have they achieved so far?

Animal Rebellion declared themselves in open rebellion against the UK government on 17th August 2019, during the Official Animal Rights March. I was at the 10,000-strong march, which stopped to occupy Trafalgar Square, where speakers from the movement set out their demands and autumn rebellion plans.

Following this, Animal Rebellion reforested Parliament Square as a symbolic act while the Amazon Rainforest burned, spray-painted government buildings and held training sessions for activists. They also attended the 2019 Vegan Campout in August, where I listened to their speeches and signed up to be part of the movement. 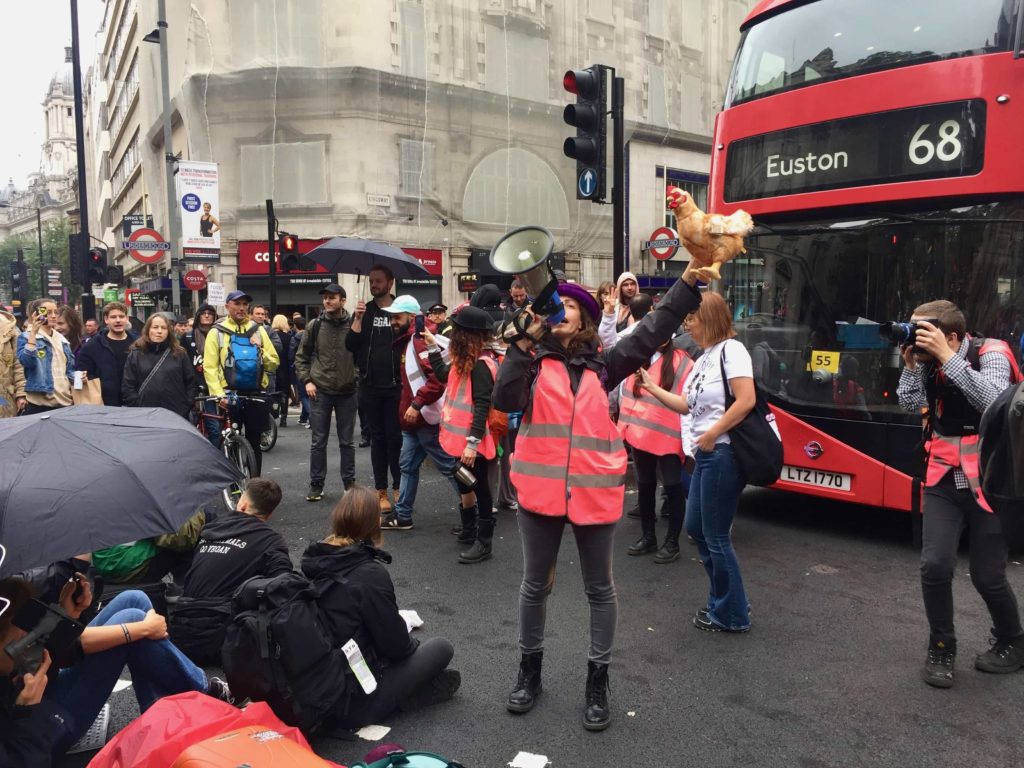 It wasn’t until October though that things really kicked into gear, alongside the XR protests. On the 7th October, I joined 1,500 people to march through London, waving banners, chanting and briefly stopping traffic to occupy Smithfield, the UK’s oldest meat market. 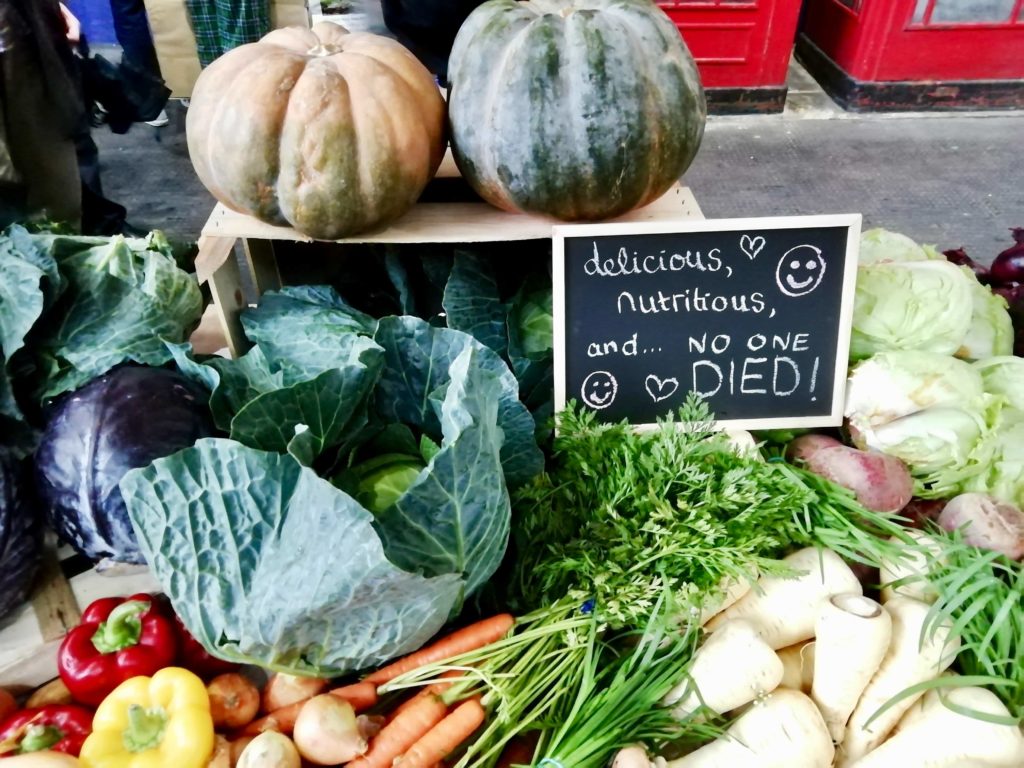 Despite the setting, there was a celebratory atmosphere as we all gathered under the meat market’s arch. People shared food, burned incense and decorated the space with banners. To show the world what a plant-based alternative to the market would be like, stalls were set up with vegan food and piles of fruit and vegetables.

As evening drew in, there were performances from vegan musicians and impassioned speeches from TV presenter Chris Packham, as well as The Guardian’s environmental reporter, George Monbiot, who was later arrested during the Animal/Extinction Rebellion protests. Later that night, during the 18-hour sit-in, there was a candlelit vigil for the animals as meat trucks came in to deliver their bodies. 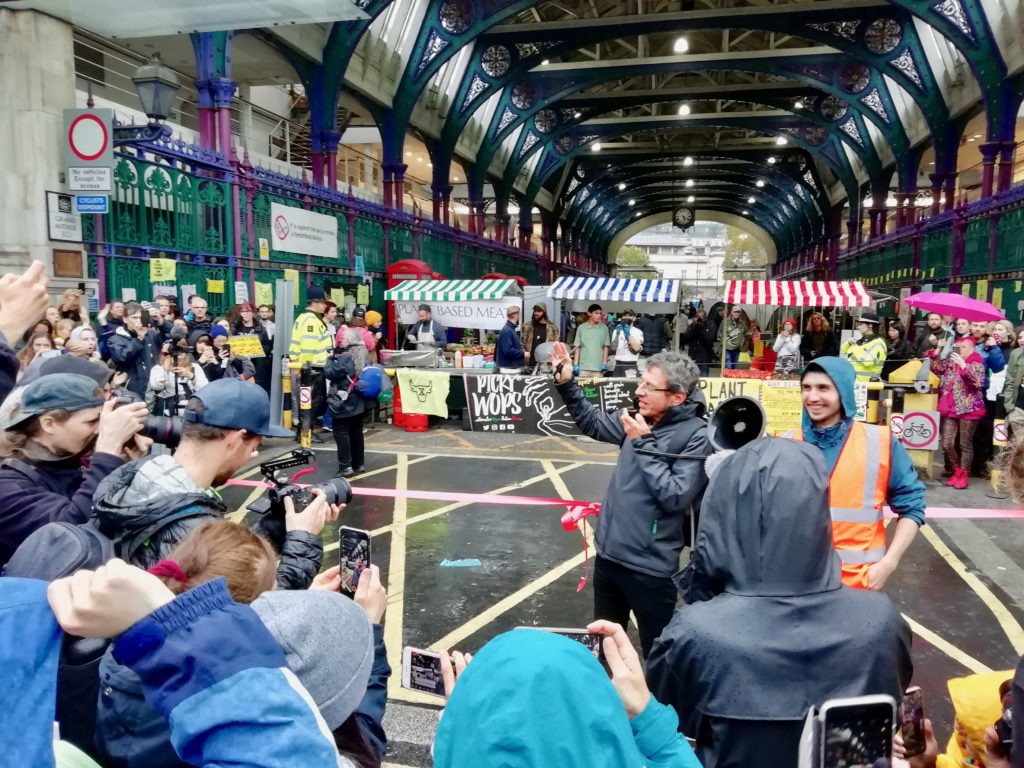 I found the Smithfield action an incredibly positive and productive experience that garnered national and international news coverage. The action was peaceful and conducted in cooperation with the market, all the police I saw and engaged with during the event were polite and respectful. Just one man was arrested for climbing atop the market and unfurling a banner. 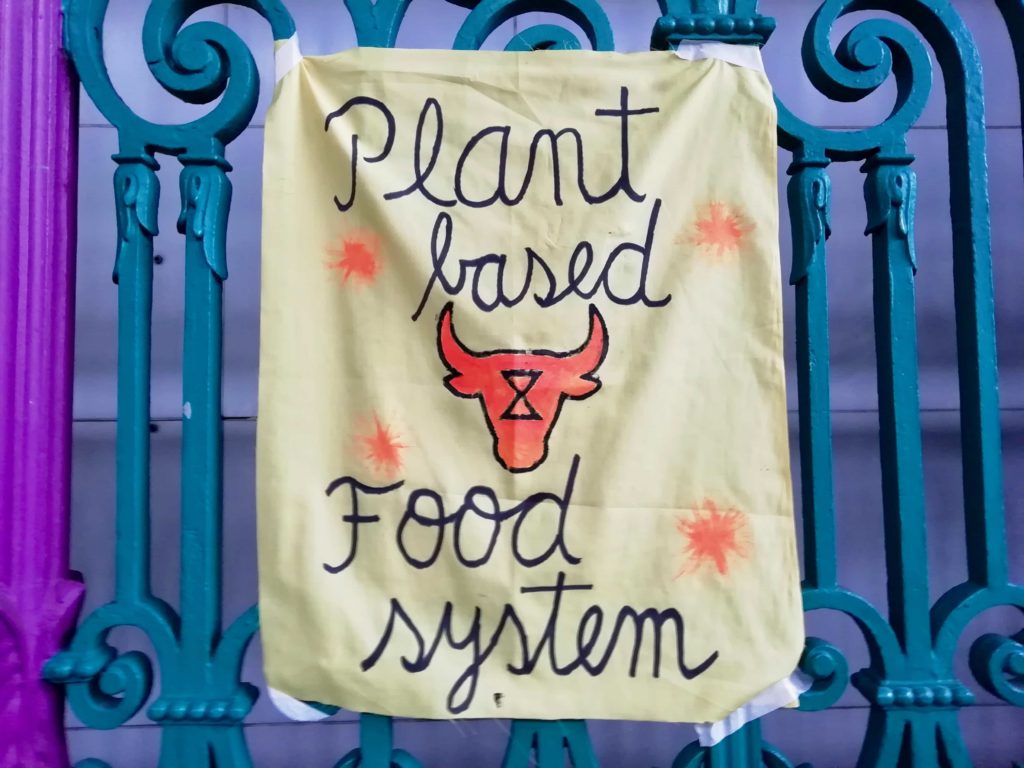 Throughout the next week, Animal Rebellion moved around London, occupying various spaces and eventually merging with XR. Time was spent protesting outside DEFRA and other government buildings, there were marches and hundreds of activists camped out, occupying spaces such as parks and Trafalgar Square. Spokespeople from the group appeared on national TV and were quoted in mainstream news outlets. 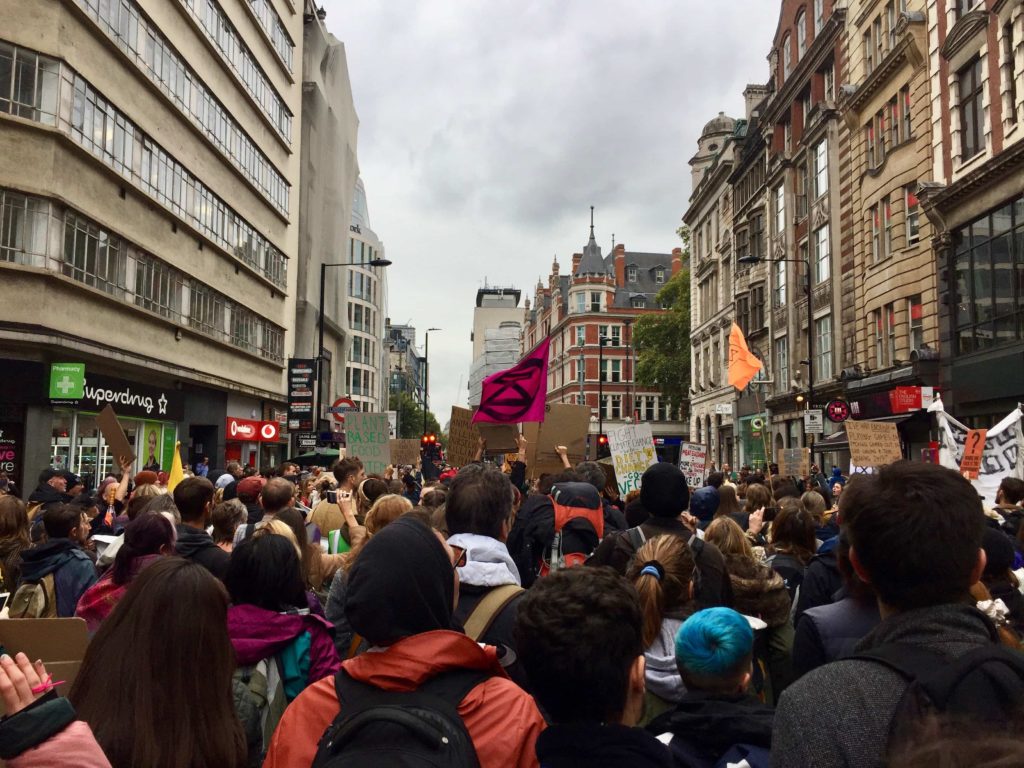 A second direct action attracted more media attention, as 200 activists gathered in the early hours of the morning to shut down Billingsgate Fish Market in Poplar. Around 28 people were arrested for blocking the road for a vigil and one man was arrested for chaining himself to the entrance gate. 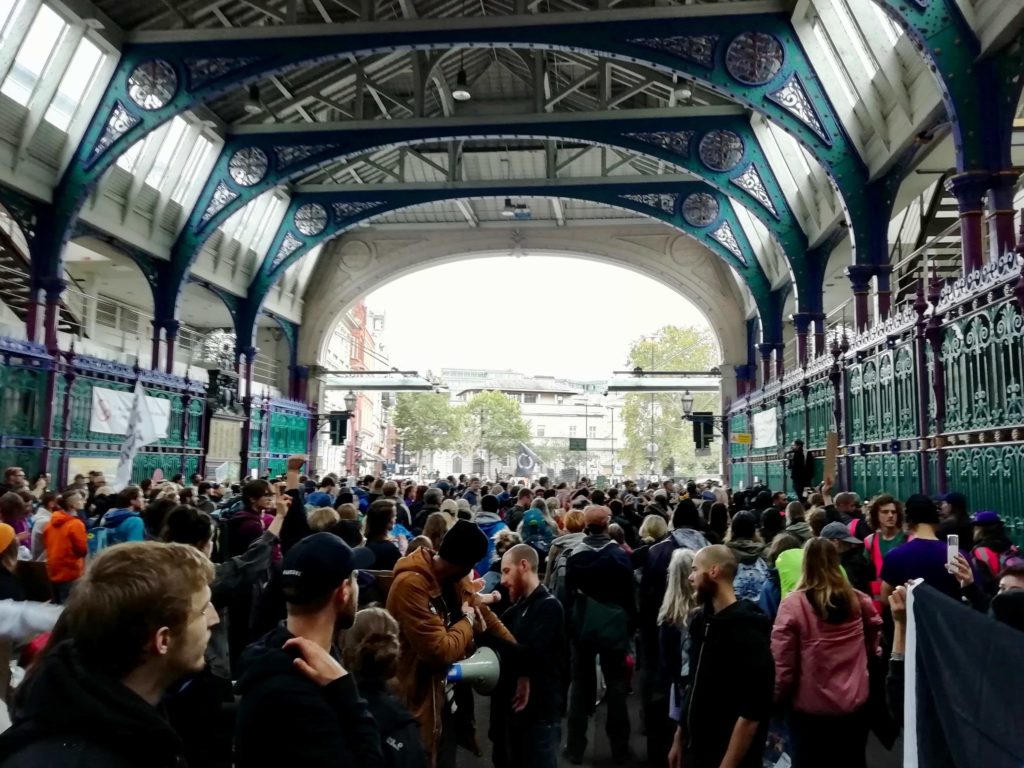 How to get involved with Animal Rebellion

Animal Rebellion’s message is even more crucial now that we’ve seen the damage a zoological virus can cause in the form of Covid-19. The pandemic and lockdown has made actions more difficult in 2020, but Animal Rebellion are still operating and held a Blood on Your Hands global action in July outside of local authority offices (with masks, gloves and social distancing) to emphasise the pressing need for food system change. 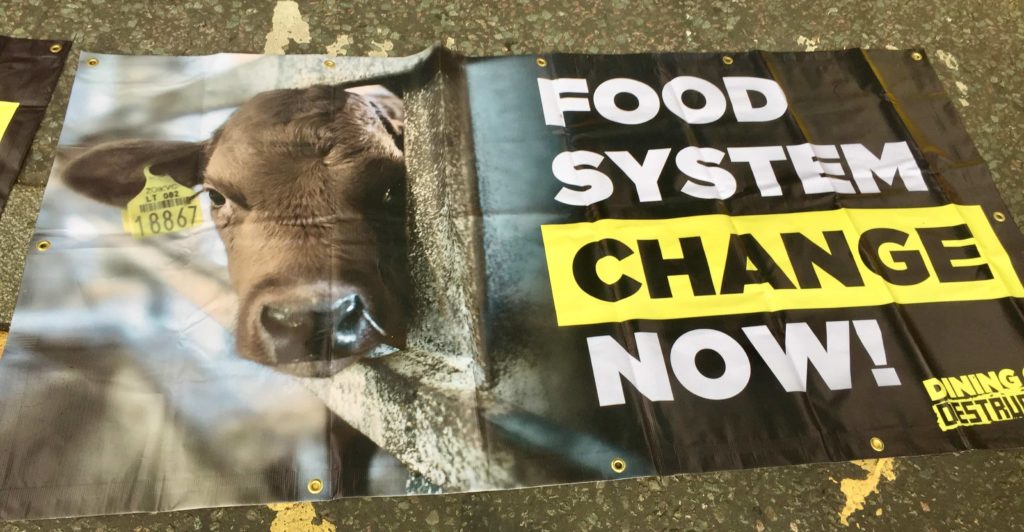 There have also been recent protests and vigils over the killing of animal rights activist Regan Russell in Canada. Right now, the easiest way to get involved with Animal Rebellion is to take part in #alonetogether, Animal Rebellion’s Zoom programme of workshops Q&As and Non-Violent-Direct-Action training. Here’s how you can learn more and get involved: 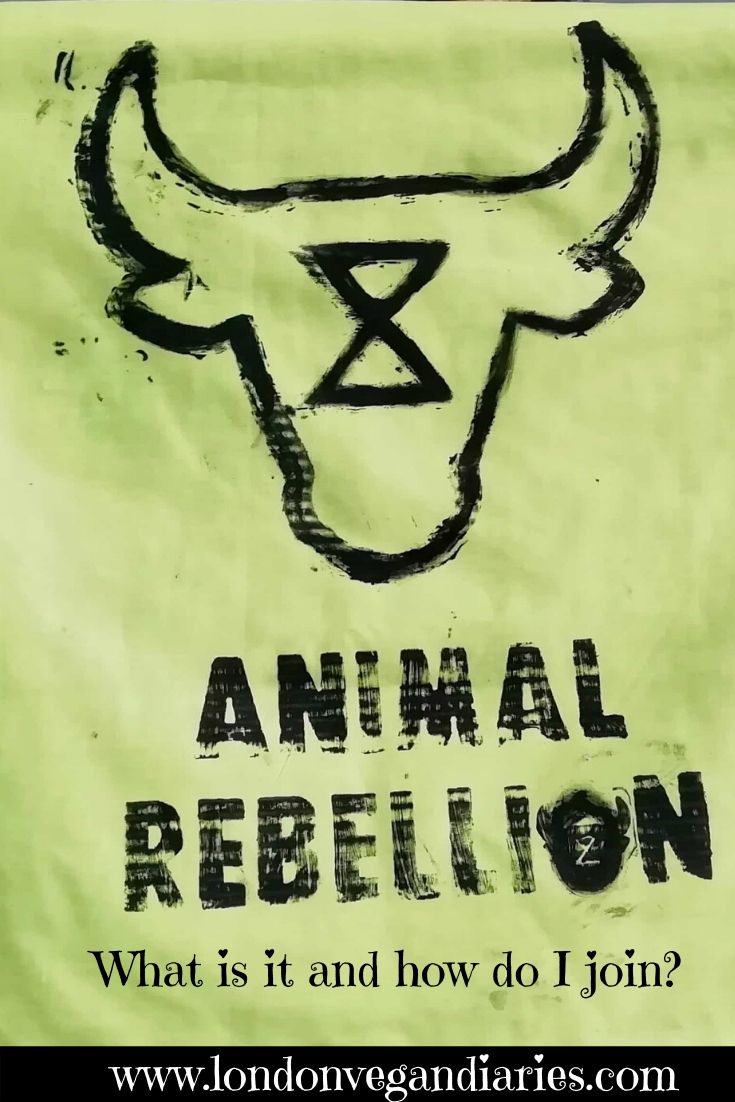